Beyond Scandal and Desire: A Sins for All Seasons Novel (Mass Market) 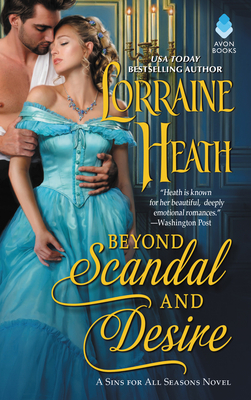 This is book number 1 in the Sins for All Seasons series.

At birth, Mick Trewlove, the illegitimate son of a duke, was handed over to a commoner. Despite his lowly upbringing, Mick has become a successful businessman, but all his wealth hasn’t satisfied his need for revenge against the man who still won’t acknowledge him. What else can Mick do but destroy the duke’s legitimate son—and woo the heir’s betrothed into his own unloving arms . . .

Orphaned and sheltered, Lady Aslyn Hastings longs for a bit of adventure. With her intended often preoccupied, Aslyn finds herself drawn to a darkly handsome entrepreneur who seems to understand her so well. Surely a lady of her station should avoid Mick Trewlove. If only he weren’t so irresistible . . .

As secrets are about to be exposed, Mick must decide if his plan for vengeance is worth risking what his heart truly desires.

“RITA Award–winner Heath’s new Sins for All Seasons series is off to an impressive start with an unforgettable, emotionally charged love story that will dazzle and delight readers with its exquisitely crafted characters, deliciously sensual romance, and impeccably rendered historical setting.” — Booklist (starred review)

“Heath launches a winning and steamy Victorian series... [she] builds a community of fascinating, intertwined characters that readers will be eager to get to know as they cheer for the driven hero and the spunky, smart heroine.” — Publishers Weekly

“[Heath’s] talents for drawing readers into the era with her well-drawn, three dimensional characters and realistic dialogue sets her novels apart. The unexpected twists and turns of the plot guarantees it will be placed on your keeper shelf.” — RT Book Reviews (top pick)

“Clever twists and turns complicate [the] path to a happy future, making Beyond Scandal and Desire a thoroughly delicious and romantic read.” — BookPage (top pick)

“Carefully researched details, a fascinating look into the baby-farming scandals of the period, and a wealth of intriguing bastards make this steamy, cleverly plotted Victorian a perfect start to a rollicking series.” — Library Journal

“The author’s talent for chemistry is as bold as the fireworks that explode in the first chapter.” — Kirkus Reviews