Sacred Clowns: A Novel (A Leaphorn and Chee Novel #11) (Paperback) 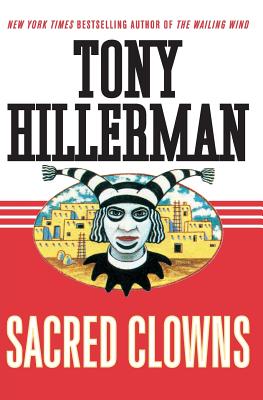 By Tony Hillerman
$16.99
Backordered or Out of Print

This is book number 11 in the A Leaphorn and Chee Novel series.

From New York Times bestselling author Tony Hillerman comes another unforgettable mystery in which Leaphorn & Chee must race against the clock to solve two brutal murders.

“[Hillerman's] clowns are . . . every bit as raucous, profane, and funny as Shakespeare's."—New York Times Book Review

During a kachina ceremony at the Tano Pueblo, the antics of a dancing koshare fill the air with tension. Moments later, the clown is found bludgeoned to death, in the same manner a reservation schoolteacher was killed only days before.

Officer Jim Chee and Lieutenant Joe Leaphorn believe that answers lie in the sacred clown's final cryptic message to the Tano people. But to decipher it, the two Navajo policemen may have to delve into closely guarded tribal secrets—on a sinister trail of blood that links a runaway, a holy artifact, corrupt Indian traders, and a pair of dead bodies.

TONY HILLERMAN served as president of the Mystery Writers of America and received the Edgar and Grand Master Awards. His other honors include the Center for the American Indian’s Ambassador Award, the Spur Award for Best Western Novel, and the Navajo Tribal Council Special Friend of the Dineh award. A native of Oklahoma, Tony Hillerman lived in Albuquerque, New Mexico, until his death in 2008.