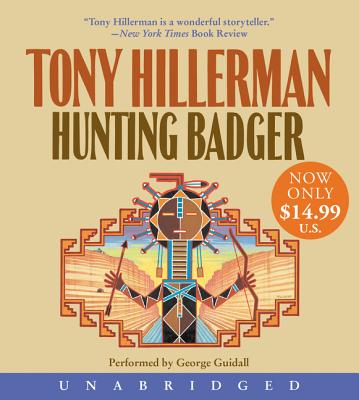 By Tony Hillerman, George Guidall (Read by)
$14.99
Backordered or Out of Print

In 1998 three heavily armed “survivalists” came out of the Four Corners canyons in a stolen truck, murdered a policeman—and eluded an epic manhunt. The crime and the bungled FBI investigation left behind a web of mysteries. The most puzzling of all: what crime were the men enroute to commit when Officer Dale Claxton stopped them—and paid for his bravery with his life?

Tony Hillerman assigns these real-life puzzles to his fictional Navajo Tribal police officers—Sergeant Jim Chee and Lieutenant Joe Leaphorn (retired). The time is now, and the memory of the mishandled manhunt of 1998 is still painfully fresh when three men stage a pre-dawn raid on the Ute Tribe’s gambling casino, and then disappear in the maze of canyons on the Utah-Arizona border after killing a policeman. Together, Chee and Leaphorn discover an intriguing pattern connecting this crime with the exploits of a legendary Ute hero/bandit. Tightly plotted and beautifully written, Hunting Badger proves once again that no one tells a story like Tony Hillerman.

George Guidall is one of the foremost narrators in the audiobook industry, having recorded over 500 unabridged books ranging from classics to contemporary bestsellers. He is the recipient of the 1999 Audie Award presented by the Audio Publishers Association for the best narration of unabridged fiction.