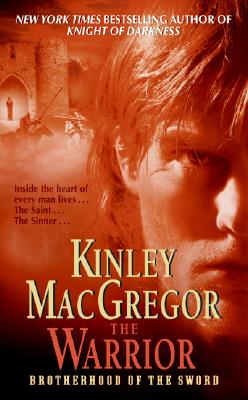 By Kinley MacGregor
$8.99
Backordered or Out of Print

This is book number 5 in the MacAllister Series series.

Lochlan MacAllister was born to lead. Ruthlessly groomed to take control of his clan, he has given his life to his people. But when he learns that the brother he thought was dead might still be alive, he embarks on a quest to find the truth.

Catarina wants a life of freedom. But now Catarina's royal father wants to use her as a pawn to ensure a treaty between conflicting lands. So much so that he's willing to kidnap his daughter to force the issue. But when she escapes, fate throws her into the path of a man she loathes.

Lochlan is stunned to find the shrewish Cat being hauled away by unknown men. Unwilling to see even her suffer, he frees her only to learn that she has her own demons to fight. When their fates intertwine, two people who know nothing of trust must rely on each other, and two enemies who have vowed their eternal hatred must find common ground, or see their very lives shattered.

#1 New York Times and international bestselling author Sherrilyn Kenyon also writes as Kinley MacGregor. Since her first book debuted in 1993 while she was still in college, she has placed more than 80 novels on the New York Times list in all formats and genres, including manga and graphic novels, and has more than 70 million books in print worldwide. Her current series include: Dark-Hunters®, Chronicles of Nick®, Deadman’s Cross™, Black Hat Society™, Nevermore™, Silent Swans™, Lords of Avalon® and The League®. Over the years, her Lords of Avalon® novels have been adapted by Marvel, and her Dark-Hunters® and Chronicles of Nick® are New York Times bestselling manga and comics, and are #1 bestselling adult coloring books.