There's a Hair in My Dirt!: A Worm's Story (Paperback) 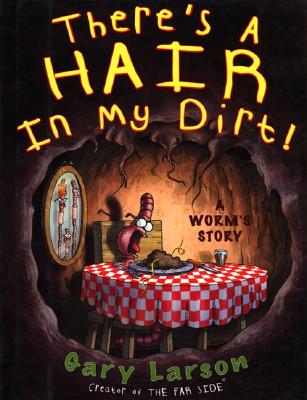 " There's a Hair in My Dirt! is hysterical . . . more entertaining than any science class I remember and the foreword by biologist Edward O. Wilson proves it's legit."  — Washington Post

Once upon a time in a place far away, lived a man named Gary Larson who used to draw cartoons. It was a cartoon that appeared for many years in daily newspapers and was loved by millions. (And was confusing to millions more.) But one day he stopped. He went into hiding. He made a couple short films. He threw sticks for his dogs. They threw some back.

Gary was restless. He couldn't sleep nights. Something haunted him. Something that would return him to his roots in biology, drawing and dementia--a tale called There's a Hair in My Dirt! A Worm's Story.

It begins a few inches underground, when a young worm, during a typical family dinner, discovers there's a hair in his plate of dirt. He becomes rather upset, not just about his tainted meal but about his entire miserable, wormy life. This, in turn, spurs his father to tell him a story--a story to inspire the children of invertebrates everywhere.

And so Father Worm describes the saga of a fair young maiden and her adventuresome stroll through her favorite forest, a perambulator's paradise. It is a journey filled with mystery and magic. Or so she thinks.

Written and illustrated in a children's storybook style, There's a Hair in My Dirt! A Worm's Story is a twisted take on the difference between our idealized view of Nature and the sometimes cold, hard reality of life for the birds and the bees and the worms (not to mention our own species).

Told with his trademark off-kilter humor, this first original non--Far Side book is the unique work of a comic master.

Now Larson can finally sleep at night. Question is, will you?

Gary Larrson creator of the phenomenally successful cartoon, The Far Side®, grew up in Tacoma, Washington. As a kid he liked to draw but never formally studied art or considered being a cartoonist. His real love was biology, which ultimately became a frequent topic in his cartoon panel.

Larson has the distinction of having the scientific community name a biting louse and a butterfly after him. He lives in Seattle, Washington--above ground.

"A truly twisted fairy tale that is perfect for teens who enjoy the macabre. In his offbeat and inimitable style, Larson presents a biology through his narrator, an earthworm." — School Library Journal

"There's a Hair in My Dirt! is hysterical . . . more entertaining than any science class I remember and the foreword by biologist Edward O. Wilson proves it's legit." — Washington Post

"The comic genius, the author of the blackly buoyant and sorely missed Far Side comic strip ... Mr. Larson is among us again, not as a syndicated cartoonist, but as a contemporary fabulist." — New York Times