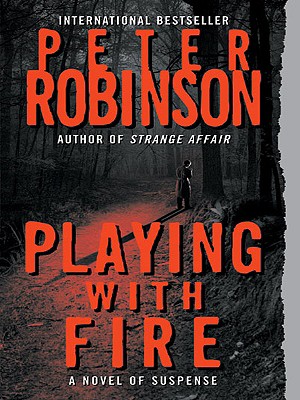 By Peter Robinson
$24.99
Backordered or Out of Print

This is book number 14 in the Inspector Banks Novels series.

Chief Inspector Alan Banks finds himself up against a diabolical arsonist in this electrifying novel of suspense from New York Times bestselling author Peter Robinson.

In the early hours of the morning, a man reports a fire on two old canal boats. One of the firefighters notices the use of accelerant at the scene and calls the police, but by the time Inspector Banks arrives, the fire brigade have put out the flames and only the smoldering wreckage remains. A body has been found on each barge, and all the evidence points towards a deliberate arson attack.

One of the victims is Tina, a young girl with a drug addiction and a terrible past who had been living with her boyfriend Mark. The other is Tom, an artist who had been living alone. Now, with little evidence to go on and a number of possible suspects, including Tina's boyfriend, the local 'lock-keeper' who reported the fire, and Tina's own father, Banks must begin to delve into the lives of the victims, and to discover who could have wanted them out of the way forever...

From the master of psychological suspense, Peter Robinson, comes a mind-bending thriller of secrets and murder.

“So vivid that even those who aren’t usually fans of procedural thrillers will fill their fingers burning.” — People (Critic's Choice)

“[Robinson’s] talents...account for both the quickness of mind that makes Banks such a keen protagonist.” — New York Times Book Review

“Kept us up past our bedtime.” — Boston Globe

“Robinson is not just a master storyteller, he’s a literary magician.” — Montreal Gazette

“A tale that’s both satisfyingly traditional in one regard, and thoroughly up-to-date in its setting and psychological insight.” — Orlando Sentinel

“Robinson is on a winning streak.” — Tampa Tribune

“[PLAYING WITH FIRE] has a loud ring of truth and a good deal of suspense.” — Chicago Tribune

“Robinson has won just about every mystery award there is….His latest shows why.” — Booklist (starred review)

The novels of Peter Robinson are: “Deeply nuanced works of art.” — Dennis Lehane

“Cunning…authentic and atmospheric.” — The Independent (London)

“Absorbing…Robinson continues to stretch the boundaries of the standard procedural.” — Orlando Sentinel

“Robinson actually seems to grow in front of our eyes, delivering books of greater complexity each time.” — Otto Penzler