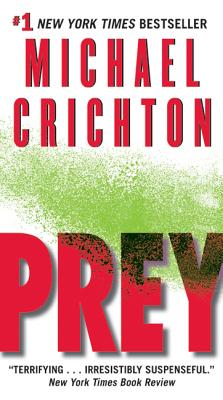 In the Nevada desert, an experiment has gone horribly wrong. A cloud of nanoparticles—micro-robots—has escaped from the laboratory. This cloud is self-sustaining and self-reproducing. It is intelligent and learns from experience. For all practical purposes, it is alive.

It has been programmed as a predator. It is evolving swiftly, becoming more deadly with each passing hour.

Every attempt to destroy it has failed.

And we are the prey.

Michael Crichton (1942-2008) was the author of the bestselling novels The Terminal Man, The Great Train Robbery, Jurassic Park, Sphere, Disclosure, Prey, State of Fear, Next and Dragon Teeth, among many others. His books have sold more than 200 million copies worldwide, have been translated into forty languages, and have provided the basis for fifteen feature films. He wrote and directed Westworld, The Great Train Robbery, Runaway, Looker, Coma and created the hit television series ER. Crichton remains the only writer to have a number one book, movie, and TV show in the same year.

Daniel H. Wilson is a Cherokee citizen and author of the New York Times bestselling Robopocalypse and its sequel Robogenesis, as well as ten other books. He recently wrote the Earth 2: Society comic book series for DC Comics. Wilson earned a PhD in Robotics from Carnegie Mellon University, as well as master’s degrees in Artificial Intelligence and Robotics. He has published over a dozen scientific papers and holds four patents. Wilson lives in Portland, Oregon.

“INTRICATE PLOTTING AND FLAWLESS PACING…you won’t be able to put it down.” — Time magazine

“This is how to write a thriller …Crichton’s latest page-turning triumph.” — Detroit Free Press

“Crichton has proved he knows how to ratchet up the fear factor.” — Denver Post

“…so god-awful scary and relentless, it’ll knock your head clear of whatever ails you.” — St. Petersburg Times

“Once again, Crichton has proved to be uncannily timely.” — St. Louis Post-Dispatch

“A cross between Jurassic Park and The Andromeda Strain….” — Columbus Dispatch

“A terrific novelist…He could make most readers lose sleep all night and call in sick the next day.” — San Francisco Chronicle

“Crichton is a doctor of suspense.” — Des Moines Sunday Register

“He is without peer.” — Chattanooga Times

“One of the great storytellers of our age…What an amazing imagination.” — New York Newsday

“Michael Crichton has written some of America’s most fantastic novels.” — Milwaukee Journal Sentinel