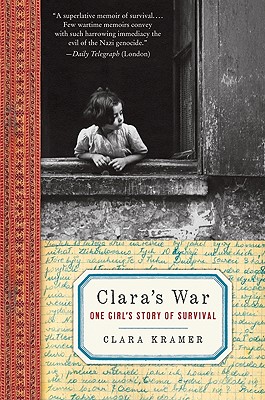 In the classic vein of The Diary of Anne Frank—a heart-wrenching and inspiring story of a life lived in fear and cramped quarters—Clara’s War is a true story of the Holocaust.

Cara Kramer was a typical Polish-Jewish teenager from a small town at the outbreak of the Second World War. When the Germans invaded, Clara's family was taken in by the Becks, a Volksdeutsche (ethnically German) family from their town. Mrs. Beck worked as Clara's family's housekeeper. Mr. Beck was known to be an alcoholic, a womanizer, and a vocal anti-Semite. But on hearing that Jewish families were being led into the woods and shot, Beck sheltered the Kramers and two other Jewish families.

Eighteen people in all lived in a bunker dug out of the Becks' basement. Fifteen-year-old Clara kept a diary during the twenty terrifying months she spent in hiding, writing down details of their unpredictable life—from the house's catching fire to Mr. Beck's affair with Clara's neighbor; from the nightly SS drinking sessions in the room above to the small pleasure of a shared Christmas carp.

Against all odds, Clara lived to tell her story, and her diary is now part of the permanent col-lection of the United States Holocaust Memorial Museum in Washington, D.C.

Clara (Schwarz) Kramer and her family were among the approximately five thousand Jews in Zolkiew, Poland, before World War II. At the end of the war, she and her parents numbered among the approximately sixty who survived. Kramer has served as president of the Holocaust Resource Foundation at Kean University for the past two decades. She lives in New Jersey.

“This vividly detailed and taut narrative is a fitting tribute to the bravery of victims and righteous gentiles alike.” — Publishers Weekly

“A superlative memoir of survival. . . . Few wartime memoirs convey with such harrowing immediacy the evil of the Nazi genocide. . . . Her book is a model documentary.” — Daily Telegraph (London)

“Utterly compelling. At times, the tension is as high as in any thriller designed to stop your heart.” — John Clare, The Sun-Herald (Australia)