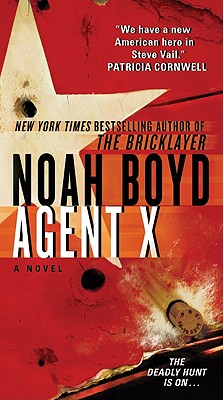 By Noah Boyd
$9.99
Backordered or Out of Print

This is book number 2 in the Steve Vail Novels series.

“The bricklayer is back! Steve Vail is pulled out of retirement again to help uncover double agents working for the Russians. With his clever mind and ability to see clues where no one else can, Vail quickly follows the thread from one traitor to another. But is he uncovering the agents, or are they part of a plot to catch him? Once again, Boyd throws in many twists and turns, and the bricklayer is as hot as the action.”
— Laura Lucy, White Birch Books, North Conway, NH

“Vail is in the mold of Lee Child’s Jack Reacher and Robert Crais’s Joe Pike….This guy has movie written all over him.”
—Chicago Sun-Times

“Fans of Sam Spade and Jack Reacher will feel right at home with this new tough guy.”
—Boston Globe

“We have a new American hero in Steve Vail.”

Steve Vail, former discarded covert operative and the FBI’s new go-to guy for the toughest jobs, returns in Agent X—the pulse-pounding follow-up to the explosive New York Times bestselling debut thriller by Noah Boyd, The Bricklayer. A former FBI agent himself, author Boyd pulls out all the stops in Agent X—as “the Bricklayer” hunts down an elusive Russian spy in a taut and authentic thriller that rivals the very best of Brad Thor, Vince Flynn, Stephen Hunter, and Robert Ludlum.

Noah Boyd is the author of the New York Times bestseller The Bricklayer and a former FBI agent who spent more than twenty years working some of the Bureau's toughest investigations, including the Green River Killer case and the Highland Park Strangler case (which he's credited with solving). He currently works on cold cases when he's not writing. He lives in New England.