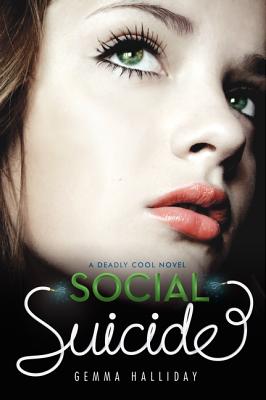 By Gemma Halliday
$8.99
Backordered or Out of Print

Twittercide: the killing of one human being by another while the victim is in the act of tweeting.

Call me crazy, but I figured writing for the Herbert Hoover High Homepage would be a pretty sweet gig. Pad the resume for college applications, get a first look at the gossip column, spend some time ogling the paper's brooding bad-boy editor, Chase Erikson. But on my first big story, things went . . . a little south. What should have been a normal interview with Sydney Sanders turned into me discovering the homecoming queen–hopeful dead in her pool. Electrocuted while Tweeting. Now, in addition to developing a reputation as HHH's resident body finder, I'm stuck trying to prove that Sydney's death wasn't suicide.

I'm starting to long for the days when my biggest worry was whether the cafeteria was serving pizza sticks or Tuesday Tacos. . . .

When Gemma Halliday was sixteen she wanted to be either a rock star or Marilyn Monroe. Instead, she ended up working as a film extra, a teddy bear importer, a department store administrator, a preschool teacher, a temporary-tattoo artist, and a 900-number psychic before settling on the career of author. Since then, her books have been published in several countries, optioned for television, and have won lots of cool, shiny trophies, including a National Readers' Choice Award and three RITA nominations. Gemma now lives in the San Francisco Bay area, where she loves watching reality TV shows, eating takeout pizza, and shoe shopping. She is also the author of Deadly Cool.