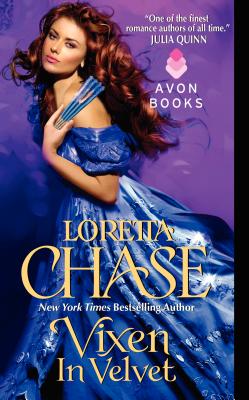 This is book number 3 in the The Dressmakers Series series.

From the Diary of Leonie Noirot: The perfect corset should invite its undoing . . .

Lethally charming Simon Blair, Marquess of Lisburne, has reluctantly returned to London for one reason only: a family obligation. Still, he might make time for the seduction of a certain redheaded dressmaker—but Leonie Noirot hasn't time for him. She's obsessed with transforming his cousin, the dowdy Lady Gladys, into a swan.

Leonie's skills can coax curves—and profits—from thin air, but his criminally handsome lordship is too busy trying to seduce her to appreciate her genius. He badly needs to learn a lesson, and the wager she provokes ought to teach him, once and for all.

A great plan, in theory—but Lisburne's become a serious distraction and Leonie's usual logic is in danger of slipping away as easily as a silk chemise. Could the Season's greatest transformation be her own?

Loretta Chase has worked in academe, retail, and the visual arts, as well as on the streets—as a meter maid—and in video, as a scriptwriter. She might have developed an excitingly checkered career had her spouse not nagged her into writing fiction. Her bestselling historical romances, set in the Regency and Romantic eras of the early nineteenth century, have won a number of awards, including the Romance Writers of America’s RITA®. For more about her past, her books, and what she does and doesn’t do on social media, please visit her website. LorettaChase.com

“There’s something so enchanting about the story, the characters and their relationships that makes Vixen in Velvet more than a love story; it’s joyous.” — Romantic Times BOOKclub, 4.5 stars

“A new release by Miss Chase is cause to celebrate and Vixen in Velvet has all of Loretta Chase’s trademark style--humor, witticism, delightful sexual chemistry, and fascinating characters.” — Heroes and Heartbreakers