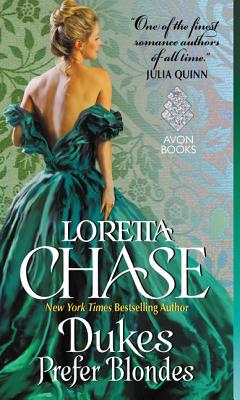 This is book number 4 in the The Dressmakers Series series.

Biweekly marriage proposals from men who can't see beyond her (admittedly breathtaking) looks are starting to get on Lady Clara Fairfax's nerves. Desperate to be something more than ornamental, she escapes to her favorite charity. When a child is in trouble, she turns to tall, dark, and annoying barrister Oliver Radford.

Though he's unexpectedly found himself in line to inherit a dukedom, Radford's never been part of fashionable society, and the blonde beauty, though not entirely bereft of brains, isn't part of his plans. But Clara overwhelms even his infallible logic, and when wedlock looms, all he can do is try not to lose his head over her . . .

It's an inconvenient marriage by ordinary standards, but these two are far from ordinary. Can the ton's most adored heiress and London's most difficult bachelor fall victim to their own unruly desires?

Loretta Chase has worked in academe, retail, and the visual arts, as well as on the streets—as a meter maid—and in video, as a scriptwriter. She might have developed an excitingly checkered career had her spouse not nagged her into writing fiction. Her bestselling historical romances, set in the Regency and Romantic eras of the early nineteenth century, have won a number of awards, including the Romance Writers of America’s RITA®. For more about her past, her books, and what she does and doesn’t do on social media, please visit her at LorettaChase.com.

“Queen of love and laughter Chase returns with a laugh-out-loud novel destined for the keeper shelf. There’s hardly time to breathe between giggles and guffaws...The result is perfection.”
— Romantic Times, TOP PICK

Quinn of love and laughter Chase returns with a laugh-out-loud novel destined for the keeper shelf. There’s hardly time to breathe between giggles and guffaws as a delightful cast of characters romp through the countryside to an ancient Scottish castle inhabited by ghosts. The result is perfection.
— Romantic Times TOP PICK

“There’s something so enchanting about the story, the characters and their relationships that makes Vixen in Velvet more than a love story; it’s joyous.”
— Romantic Times BOOKclub, 4.5 stars

Chase moves beyond the couture Noirot sisters in her historical Dressmakers series, and the unconventional pairing of an aristocrat and a barrister, plus an exploration of London poverty and the well-intentioned “ragged schools,” adds fascinating social and historical texture. Chase retains her well-earned star status.
— Kirkus Reviews, praise for DUKES PREFER BLONDES

“In addition to the powerful social commentary on women’s role in society and the life of youth in London’s poverty-ridden back alleys and schools, Chase’s tongue-in-cheek tone captures tender and humorous nuances in character descriptions and actions, creating fully realized characters and a rich plot.”
— Publishers Weekly (starred review), praise for DUKES PREFER BLONDES

RITA Award-winning Chase...deftly stitches together superbly nuanced characters, a captivating plot that realistically deals with both the glitter and grime of the Regency era, and a graceful writing style fueled by a resplendent sense of wit to create a romance to cherish.
— Booklist (starred review) for DUKES PREFER BLONDES

With flawless research, exquisite sensuality, and brilliant repartee that extends to the bedroom, this is another unforgettable winner from the impeccable Chase.
— Library Journal (starred review) for DUKES PREFER BLONDES

“One of the best writers in the genre...This is romance as it should be: a lush tale that is really about much more than love - it’s about womanhood, social issues and happiness.”
— All About Romance praise for DUKES PREFER BLONDES

“...a lingering, sensual romance set against a rich backdrop of pre-Victorian London in all its glamour and grime. This is romance as it should be: a lush tale that is really about much more than love - it’s about womanhood, social issues and happiness.”
— NYT bestselling author Sarah MacLean in the Washington Post