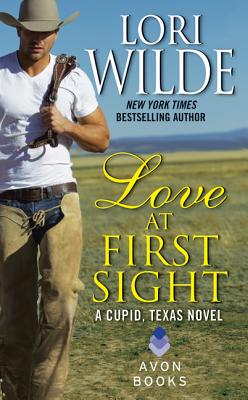 By Lori Wilde
Email or call for price.
Special Order

This is book number 1 in the Cupid, Texas series.

Welcome to Cupid, Texas, where every wish for love comes true…

In her sexy new series of romance novels, New York Times bestselling romance author Lori Wilde, introduces a town where the residents are more than likely to fall in love at first sight.

Passion has been notably lacking in the life of sensible Natalie McCleary. But when ex–Navy SEAL Dade Vega roars into Cupid on his motorcycle, and she stumbles on him stark naked and soaking wet, she suddenly understands what it means to be struck by love. Dade feels it too.

Will he stick around and give them both a happy ending or will this footloose loner move on and leave her heartbroken?

Love at First Sight, told with the humor and spice fans have come to expect from Lori Wilde’s delightful romances, including A Cowboy for Christmas and The Cowboy and the Princess.

Lori Wilde is the New York Times, USA Today and Publishers’ Weekly bestselling author of 87 works of romantic fiction. She’s a three-time Romance Writers’ of America RITA finalist and has four times been nominated for Romantic Times Readers’ Choice Award. She has won numerous other awards as well. Her books have been translated into 26 languages, with more than four million copies of her books sold worldwide. Her breakout novel, The First Love Cookie Club, has been optioned for a TV movie.

Lori is a registered nurse with a BSN from Texas Christian University. She holds a certificate in forensics and is also a certified yoga instructor.

A fifth-generation Texan, Lori lives with her husband, Bill, in the Cutting Horse Capital of the World; where they run Epiphany Orchards, a writing/creativity retreat for the care and enrichment of the artistic soul.