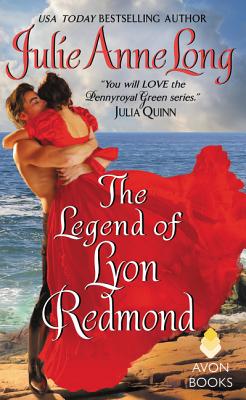 By Julie Anne Long
$7.99
Backordered or Out of Print

Bound by centuries of bad blood, England's two most powerful families maintain a veneer of civility . . . until the heir to the staggering Redmond fortune disappears, reviving rumors of an ancient curse: a Redmond and an Eversea are destined to fall disastrously in love once per generation.

Rumor has it she broke Lyon Redmond's heart. But while many a man has since wooed the dazzling Olivia Eversea, none has ever won her—which is why jaws drop when she suddenly accepts a viscount's proposal. Now London waits with bated breath for the wedding of a decade . . . and wagers on the return of an heir.

It was instant and irresistible, forbidden . . . and unforgettable. And Lyon—now a driven, dangerous, infinitely devastating man—decides it's time for a reckoning. As the day of her wedding races toward them, Lyon and Olivia will decide whether their love is a curse destined to tear their families apart . . . or the stuff of which legends are made.

USA Today bestselling author and Rita® Award winner Julie Anne Long’s books have been translated into eighteen languages, nominated for numerous awards, and have appeared on dozens of “Best of” lists. NPR named her Pennyroyal Green series as one of the Top 100 romance series of all time. She currently lives in Northern California.

The Legend of Lyon Redmond ... is a triumph of scintillating wit and soul-searing passion. From its exquisitely nuanced characters to its impeccably crafted setting, everything works together seamlessly in Long’s superbly written romance to deliver a truly affecting and unforgettable love story. — Booklist (starred review)

“Her signature humor and sensuality are here, as is a high degree of sexual tension that nearly singes readers’ hands. The emotions are palpable, and though there has to be a happy ending, readers are sure to be surprised by the conclusion. What a brilliant, creative storyteller!” — Romantic Times BOOKclub, 4 1/2 stars, praise for THE LEGEND OF LYON REDMOND