The Tide Watchers: A Novel (Paperback) 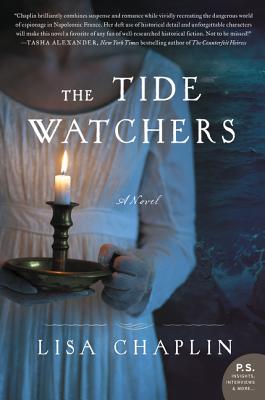 In the tradition of Jennifer Robson, comes this compelling debut that weaves the fascinating story of a young woman who must risk her life as a spy to help stop Napoleon’s invasion of Great Britain in the winter of 1803.

Though the daughter of an English baronet, Lisbeth has defied convention by eloping to France with her new husband. But when he breaks her heart by abandoning her, she has nowhere to turn and must work in a local tavern. Her only hope for the future is to be reunited with her young son who is being raised by her mother-in law.

A seasoned spy known by his operatives as Tidewatcher, Duncan apprenticed under Lisbeth’s father and pledged to watch over his mentor’s only daughter while he searches the Channel region for evidence that Bonaparte has built a fleet to invade Britain. But unpredictable Lisbeth challenges his lifelong habit of distance.

Eccentric, brilliant American inventor Robert Fulton is working on David Bushnell’s “turtle”—the first fully submersible ship—when he creates brand-new torpedo technology, which he plans to sell to the French Navy. But when his relationship with Bonaparte sours, he accepts Tidewatcher’s help to relocate to the French side of the Channel, but he refuses to share his invention. With an entire army encamped in the region, blocking off all access, Tidewatcher must get that submersible, along with someone who knows how to use it, to uncover Bonaparte’s great secret.

When Lisbeth is asked to pose as a housekeeper and charm Fulton so she can learn to use the submersible before the invasion fleet sails, she will be forced to sacrifice herself for her country—but is she willing to sacrifice her heart when she’s already lost it to another…?

Lisa Chaplin has published twenty contemporary romances under a pseudonym, but the publication of The Tide Watchers marks her mainstream debut. Lisa, her husband, and their three children currently reside in her home country of Australia.

“Lisa Chaplin brilliantly combines suspense and romance while vividly recreating the dangerous world of espionage in Napoleonic France. Her deft use of historical detail and unforgettable characters will make this novel a favorite of anyone who is a fan of well-researched historical fiction. Not to be missed!” — Tasha Alexander, NYT Bestselling Author of The Counterfeit Heiress

“In this brilliantly complex novel, Australia author Lisa Chaplin...tightens the suspense at every moment.... Highlighly recommended for anyone who likes a ‘ripping good yarn.’” — Library Journal (starred review) on THE TIDE WATCHERS

“A complex, satisfying story of romance, adventure and political intrigue set in Napoleon’s France. ” — Shelf Awareness on THE TIDE WATCHERS

“Chaplin has penned a most entertaining tale which combines fictional characters and historical figures... a fascinating story of espionage and romance in her latest work, The Tide Watchers.” — Iron Mountain Daily News on THE TIDE WATCHERS