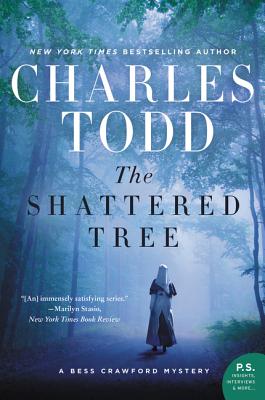 This is book number 8 in the Bess Crawford Mysteries series.

At the foot of a tree shattered by shelling and gunfire, stretcher-bearers find an exhausted officer, shivering with cold and a loss of blood from several wounds. The soldier is brought to battlefield nurse Bess Crawford’s aid station, where she stabilizes him and treats his injuries before he is sent to a rear hospital. The odd thing is, the officer isn’t British—he’s French. But in a moment of anger and stress, he shouts at Bess in German.

When Bess reports the incident to Matron, her superior offers a ready explanation. The soldier is from Alsace-Lorraine, a province in the west where the tenuous border between France and Germany has continually shifted through history, most recently in the Franco-Prussian War of 1870, won by the Germans. But is the wounded man Alsatian? And if he is, on which side of the war do his sympathies really lie?

Of course, Matron could be right, but Bess remains uneasy—and unconvinced. If he was a French soldier, what was he doing so far from his own lines . . . and so close to where the Germans are putting up a fierce, last-ditch fight?

When the French officer disappears in Paris, it’s up to Bess—a soldier’s daughter as well as a nurse—to find out why, even at the risk of her own life.

“A fast, engrossing, and entertaining read....The mystery has excellent pacing, giving readers just enough clues to keep us absorbed in the story while withholding sufficient information to keep us from solving it before reaching the end.” — All About Romance

“[A] riveting mystery… It is almost as if the Great War has become a secondary character.” — MilitaryPress.com

“Todd’s meticulous research... illustrates the toll the war has taken on the battle-weary military as well as the nurses and doctors, the sacrifices of the residents, [and] the citizens’ valiant struggle to maintain a sense of normalcy…. A vivid and personal look at WWI.” — SouthFlorida.com

“The Shattered Tree is a true spellbinder. From spies to the brutal facts of war to Bess’s unwavering determination to uncover the truth, author Charles Todd has penned yet another fantastic thriller.” — Suspense Magazine

“Admirable, courageous and occasionally reckless, Bess ranks among the best of fictional amateur sleuths. [Todd] again creates a thought-provoking novel that evokes the terrors and suspicions of war.” — Richmond Times-Dispatch

Another Charles Todd book is always a luscious treat, and I devoured The Shattered Tree in one sitting... Highly recommended. — Historical Novel Society

Praise for A Question of Honor: “A gripping whodunit haunted by the brutal realities of war and graced with the selfless determination of Bess to uncover the truth.” — Richmond Times-Dispatch on A QUESTION OF HONOR

Praise for An Unwilling Accomplice: “Bess is a character with depth and complexity, an army nurse during that awful war, so, like that series, not only intricate mysteries but engrossing historical fiction.” — SCDemocrat.com on AN UNWILLING ACCOMPLICE

Praise for A Pattern of Lies: “A richly realistic depiction of both the era and people who lived through it.” — Margaret Maron, Edgar Award-winning author

“[Charles Todd’s] books are like Sherlock Holmes detecting a crime in Downton Abbey, with more gravitas.” — Nancy Thayer, author of THE ISLAND HOUSE

“As always in this immensely satisfying series, Todd heightens the mystery by setting it within a war-shattered world of battered villages, barren farms and broken people.” — Marilyn Stasio, New York Times Book Review on THE SHATTERED TREE