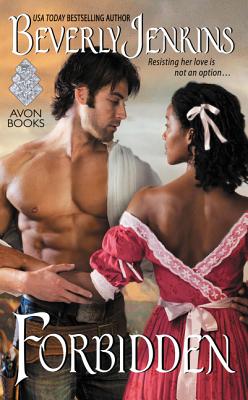 Rhine Fontaine is building the successful life he's always dreamed of—one that depends upon him passing for White. But for the first time in years, he wishes he could step out from behind the façade. The reason: Eddy Carmichael, the young woman he rescued in the desert. Outspoken, defiant, and beautiful, Eddy tempts Rhine in ways that could cost him everything . . . and the price seems worth paying.

Eddy owes her life to Rhine, but she won't risk her heart for him. As soon as she's saved enough money from her cooking, she'll leave this Nevada town and move to California. No matter how handsome he is, no matter how fiery the heat between them, Rhine will never be hers. Giving in for just one night might quench this longing. Or it might ignite an affair as reckless and irresistible as it is forbidden . . .

“It’s possible that no one sets the scene for romance better than Beverly Jenkins…This is historical romance at its very best.” — Washington Post, praise for FORBIDDEN

“For readers who enjoy love stories with steamy interludes against historical backdrops, Jenkins’ latest is not to be missed.” — Kirkus Reviews (starred review)

“When die-hard romance readers start rattling off the preeminent writers in the genre, one of the names you ought to hear every time is Beverly Jenkins.” — Jezebel.com

“In this appealing launch of a series…Jenkins combines vivid characters and sexual intensity with historical accuracy in a story and setting that will appeal to her core fans and newcomers alike.” — Publishers Weekly, praise for FORBIDDEN

“If you like vivid characters inhabiting underexplored but fascinating American history, in stories overflowing with scorchingly unresolved sexual tension, this is definitely a book for you.” — NPR (Best Books of 2016)