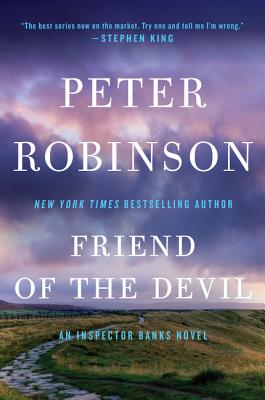 By Peter Robinson
$14.99
Backordered or Out of Print

This is book number 17 in the Inspector Banks Novels series.

A woman sits in a wheelchair perched on a cliff high above the sea, her throat slit from ear to ear . . .

In a maze of narrow alleys behind a market square, a teenaged girl has been murdered after a night of drunken revelries with her friends.

The seemingly senseless Cliffside killing falls to Inspector Annie Cabbot, on loan to a local police department. The terrible death of young Hayley Daniels becomes Chief Inspector Alan Banks's investigation. But shattering revelations threaten to awaken the slumbering demons of earlier, darker times, and more blood is in the offing when the two cases brutally and unexpectedly collide.

Friend of the Devil is a chilling, brilliant, and utterly mesmerizing novel of suspense.