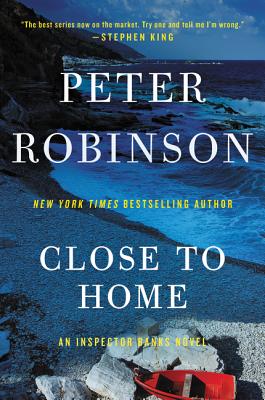 This is book number 13 in the Inspector Banks Novels series.

The past returns to haunt Chief Inspector Alan Banks in this harrowing novel of suspense from New York Times bestselling author Peter Robinson.

There are human bones, buried in an open field, the remains of a lost teenaged boy whose disappearance devastated a community more than thirty-five-years ago…and scarred a guilt-ridden friend forever…

A long-hidden horror has been unearthed, dragging a tormented policeman into a past he could never truly forget no matter how desperately he tried. A heinous crime that occurred too close to home still has its grip on Chief Inspector Alan Banks—and it’s leading him into a dark place where evil still dwells. Because the secrets that doomed young Graham Marshall back in 1965 remain alive and lethal, and disturbing them could cost Banks much more than he ever imagined.

Master of suspense Peter Robinson once again delves into the human psyche to reveal what leads some to commit murder in this compelling, unforgettable thriller.

“This one is entertaining and sophisticated, crime writing of a high order.” — Washington Post

“[A] painful but enlightening journey into the past.” — New York Times Book Review

“Highly readable... [Robinson is] one of those first-class storytellers.” — National Post

“Robinson again shows himself to be as astute a writer as P.D. James.” — Library Journal

“Stunningly complex and intricately plotted...entertained me with every twist.” — Nevada Barr

“Cunning....authentic and atmospheric.” — The Independent (London)

“Robinson, actually seems to grow in front of our eyes, delivering books of greater complexity each time.” — Otto Penzler

Praise for Aftermath “A devilishly good plotter...[Robinson’s] characterizations are so subtle that even the psychological profiler is stumped.” — New York Times Book Review

“A winner....Returning to the world of Alan Banks is, as always, a pleasure.” — Boston Globe

“Highly textured... Banks is a multidimensional figure struggling to cope with his private demons while directing murder investigations.” — Tampa Tribune