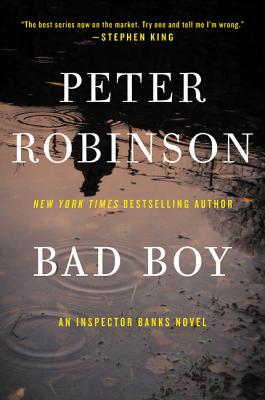 This is book number 19 in the Inspector Banks Novels series.

From New York Times bestselling author Peter Robinson comes this mesmerizing story-within-a-story—that will thrill his fans and bring him many new readers.

A distraught woman arrives at the Eastvale police station desperate to speak to Detective Chief Inspector Alan Banks. But Banks is abroad, and the woman’s revelation of a loaded gun hidden in her daughter Erin’s bedroom leads to a shocking fatality when a police armed-response team breaks into her house. The fallout will have dark consequences for Banks and his partner, DI Annie Cabbot. It turns out that Erin’s best friend is Banks’ own daughter, Tracy . . . who was last seen in the company of the weapon’s actual owner, a very bad boy indeed.

Now that his child is on the run with a psychopath, Banks finds himself caught in a bloody tangle of betrayal and murder. But the rogue DCI is a bit of a bad boy himself, and he’ll freely risk his life and career in the cause of love—and vengeance.

“A top-notch thriller that further advances Banks’ development as one of the most intriguing characters in detective fiction….With emotional literacy and inexorable momentum that builds tension to the breaking point, Robinson reaffirms his place in the top cadre of police-procedural writers.” — Richmond Times-Dispatch on Bad Boy

“Robinson once again achieves the high bar he’s set in all his previous Inspector Banks books: gut-wrenching plotting alongside heart-wrenching portraits of the characters who populate his world, not to mention the top-notch police procedure. This one will stay with you for a long time.” — Jeffery Deaver, New York Times bestselling author of Roadside Crosses

“A murderous psychopath presents Alan Banks with the most intensely personal challenge of the maverick detective’s storied career. Superbly cinematic from the beginning to the explosive finale, this would be a thrilling movie.” — Joseph Wambaugh, New York Times bestselling author of Hollywood Moon