Blush for Me: A Fusion Novel (Paperback) 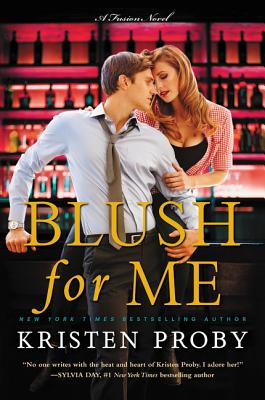 By Kristen Proby
Email or call for price.
Special Order

This is book number 3 in the Fusion series.

As the take-charge wine bar manager of Seduction, Portland's hottest new restaurant, Katrina Meyers is the definition of no-nonsense, and she isn't afraid of anything. Well, almost anything: she hates to fly. When she's forced to travel on a death trap with wings, the turbulence from hell has her reaching for any safe haven—including the incredibly handsome guy sitting next to her.

Ryan "Mac" MacKenzie hasn't been able to get his sexy seatmate out of his head. The way she clung to him stirred something inside him he didn't think existed: tenderness. As the owner of a successful wine touring company, Mac thinks he's got a handle on what life can throw at him and he's not prepared for any surprises, especially in the feelings department. And when he brings a tour into Seduction, he sees the petite spitfire he just can't forget.

Mac is determined to discover what else they have in common besides fine wine and the inability to keep their hands off each other. But what will it take for two stubborn people to realize that what they have is so much more than a hot chemistry between the sheets and to admit to falling in love…?

New York Times and USA Today bestselling author Kristen Proby is the author of the bestselling With Me In Seattle, the Big Sky and the Fusion series. She makes her home in Montana with her husband and two cats.

“With the third book in her Fusion series, Proby proves that she’s a vintage that ripens with each page.”
— Kirkus Reviews

“The third sizzling addition to Proby’s Fusion series is a hot-and-heavy romance jam-packed with unforgettable characters. The dialogue and emotions... are real and easy to decipher, and the pacing is perfect, slowly leading readers to a terrific climax. The sparks continue to fly till the exciting ending.”
— RT Book Reviews