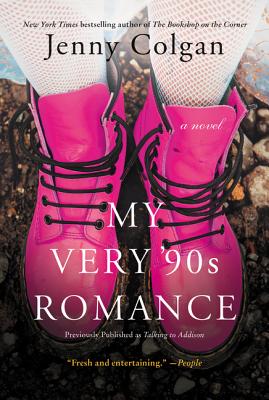 From New York Times bestselling author Jenny Colgan comes a hilarious romantic comedy about a down-on-her-luck florist whose future begins to bloom when she takes on the challenge of helping to transform her nerdy roommate.

Holly is a frustrated florist whose life doesn’t seem to be coming up roses. Fleeing a roommate situation from hell, she moves in with a motley crew of friends—Josh, a sexually confused merchant banker; Kate, a high-flying legal eagle with talons to match; and Addison, a gorgeous computer geek who spends his days communicating with his online girlfriend and anyone who worships at the altar of Jean-Luc Picard. From the moment Holly catches a rare glimpse of Addison, she’s smitten. The only problem is how to get him to swivel his chair from the computer screen to her adoring gaze.

After a series of false starts—involving a new friend and mathematician, Finn—Holly coaxes Addison away from his computer screen and out into the open. While “out in the open” spells disaster for Addison, curiously, her own future begins to bloom. Holly and her friends make desperate attempts to connect with Addison, drag him away from his fiercely possessive girlfriend, Claudia, and get him to communicate with the real world.

With Jenny Colgan’s trademark wit and a cast of unforgettable characters, My Very '90s Romance will capture your heart.

Jenny Colgan is the New York Times bestselling author of numerous novels, including The Café by the Sea, The Bookshop on the Corner, Little Beach Street Bakery, and Christmas on the Island. Jenny is married with three children and lives in Scotland.