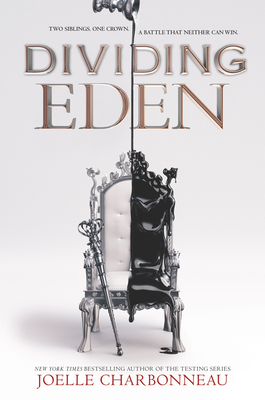 By Joelle Charbonneau
$17.99
Backordered or Out of Print

From the author of the New York Times bestselling The Testing trilogy comes a sweeping new fantasy series, perfect for fans of Victoria Aveyard and Sarah J. Maas.

Twins Carys and Andreus were never destined to rule Eden. With their older brother next in line to inherit the throne, the future of the kingdom was secure.

But appearances—and rivals—can be deceiving. When Eden’s king and crown prince are killed by assassins, Eden desperately needs a monarch, but the line of succession is no longer clear. With a ruling council scheming to gain power, Carys and Andreus are faced with only one option—to take part in a Trial of Succession that will determine which one of them is worthy of ruling the kingdom.

As sister and brother, Carys and Andreus have always kept each other safe—from their secrets, from the court, and from the monsters lurking in the mountains beyond the kingdom’s wall. But the Trial of Succession will test the bonds of trust and family.

With their country and their hearts divided, Carys and Andreus will discover exactly what each will do to win the crown. How long before suspicion takes hold and the thirst for power leads to the ultimate betrayal?

Joelle Charbonneau has performed in opera and musical-theater productions across Chicagoland. She is the author of the New York Times and USA Today bestselling Testing trilogy and the bestselling Dividing Eden series, as well as two adult mystery series and several other books for young adult readers. Her YA books have appeared on the Indie Next List, YALSA’s Top Ten Quick Picks for Reluctant Young Adult Readers, and state reading lists across the country. Joelle lives in the Chicago area with her husband and son. www.joellecharbonneau.com

“Charbonneau’s skill as a thriller writer will hook readers as the tension between the siblings grows and the Trial of Succession rushes towards an explosive end... This new fantasy will give them plenty to sink their teeth into.” — Booklist

“The trendy plot—filled with royal intrigue, romance, and a dangerous competition—is sure to make this new fantasy series a popular choice... Hand this one to fans of Sarah J. Maas, Kiera Cass, and Evelyn Skye.” — School Library Journal

“The siblings are complex characters, weighted down by their respective heartaches and issues, and their skeptical views on the world feel realistic... there’s a lot to like about this messed up, lush, and dark world.” — Bulletin of the Center for Children’s Books

“Fast-paced and full of crosses and double-crosses, right to the cliffhanger ending.” — Booklist

“Charbonneau has created an elegantly organized plot. . . The tension and conflict will have readers at the edge of their seats as the imagery and complexities of the characters and plot design are exposed.” — Voice of Youth Advocates (VOYA)

“Joelle Charbonneau made test-taking terrifying in her best-selling trilogy, The Testing. Now, she turns her dystopian eye towards social networks and teens’ wishes in Need.” — EW.com

“A fast-paced read that teens antsy to untangle the mystery will devour...hand to teens looking for a thought-provoking, timely thriller.” — Booklist