The Duke Buys a Bride: The Rogue Files (Mass Market) 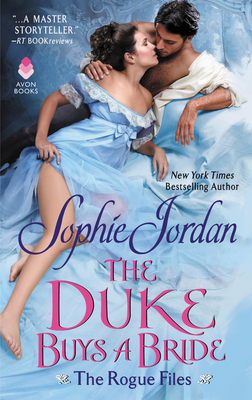 By Sophie Jordan
$8.99
Backordered or Out of Print

This is book number 3 in the The Rogue Files series.

The last thing Marcus, the Duke of Autenberry, expects to see after sleeping off a night’s drunken shenanigans is a woman being auctioned in the village square. Before he can think about the ramifications, he buys her, thinking he’s winning the girl her freedom. Instead, he discovers he’s bought a wife.

Alyse Bell is almost rid of the shackles that bound her in a name-only marriage, but the day her friend promised to purchase her in a wife auction, he vanishes, leaving her to face a mob of unsavory bachelors intent on owning her body and soul. But the appearance of a wicked, wealthy stranger changes her path forever.

Marcus doesn’t know what to do with the impertinent chit who clearly isn’t duchess material! Insisting their marriage isn’t legitimate, they leave for his estate in Scotland, hoping to devise a plan to get rid of each other. However, on a journey fraught with misadventure, their attraction grows and Marcus realizes he’ll do anything to keep this fiery woman for his own.

Sophie Jordan grew up in the Texas hill country where she wove fantasies of dragons, warriors, and princesses. A former high school English teacher, she’s the New York Times, USA Today, and international bestselling author of more than thirty novels. She now lives in Houston with her family. When she’s not writing, she spends her time overloading on caffeine (lattes preferred), talking plotlines with anyone who will listen (including her kids), and cramming her DVR with anything that has a happily ever after.

“With Alyse, Jordan crafts a fiery, lovable heroine who craves more affection and opportunity than life has given her. The author matches fire with fire... The bedroom scenes are Jordan’s forte, with the overwhelming desire of the characters blazing off the page.” — Entertainment Weekly

“A surfeit of humor, a zippy pace, and a cast of well-defined and intriguing protagonists make this a delicious late-summer read.” — Library Journal

“The author’s sly humor softens what could be a grim situation for the purchased bride and turns it into a grand adventure … muddy, messy, and very romantic” — Kirkus Reviews