Everyone's a Aliebn When Ur a Aliebn Too: A Book (Hardcover) 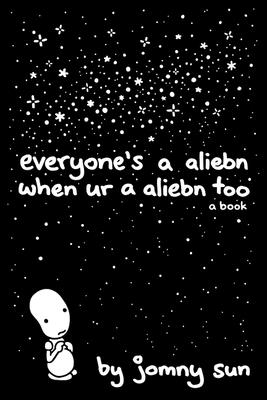 “Jomny Sun has created a frightened, hopeful view of Life As We Know It from the perspective of a weirdly relatable alien intelligence. Fantastic.” — Patton Oswalt

Everyone’s a Aliebn When Ur a Aliebn Too is the illustrated story of a lonely alien sent to observe Earth, only to meet all sorts of creatures with all sorts of perspectives on life, love, and happiness, all while learning to feel a little better about being an alien—based on the enormously popular Twitter account, @jonnysun.

Here is the unforgettable story of Jomny, a lonely alien who, for the first time ever, finds a home on our planet after learning that earthlings can feel lonely too. Jomny finds friendship in a bear tired of other creatures running away in fear, an egg struggling to decide what to hatch into, an owl working its way to being wise, a tree feeling stuck in one place, a tadpole coming to terms with turning into a frog, a dying ghost, a puppy unable to express itself, and many more.

Through this story of a lost, lonely and confused alien finding friendship, acceptance, and love among the creatures of Earth, we will all learn how to be a little more human. And for all of us earth-bound creatures here on this planet, we can all be reminded that sometimes, it takes an outsider to help us see ourselves for who we truly are.

Jonathan Sun is the author behind @jonnysun. When he isn't tweeting, he is an architect, designer, engineer, artist, playwright and comedy writer. His work across multiple disciplines is concerned with narratives of human experience. As a playwright, Jonathan's work has been performed at the Yale School of Drama, Factory Theater in Toronto, Hart House Theater, Theater Lab in Toronto, and the University of Toronto Drama Festival (where he received the President’s Award for Best Production). As an artist and illustrator, his work has been commissioned by the New Haven ArtSpace, and exhibited at MIT, the Yale School of Architecture, and the University of Toronto. His comedic work has appeared in NPR, BuzzFeed, Playboy, GQ, and McSweeney’s. He is currently a doctoral student at MIT and a Berkman Klein Fellow at Harvard.

“Jomny Sun’s incredible writing knocks you to the floor, breathless, then scoops you up and gives you a kiss where it hurts before it occurs to you to cry. Read this book only if you want to feel more alive.”
— Lin-Manuel Miranda

“Jomny Sun has created a frightened, hopeful view of Life As We Know It from the perspective of a weirdly relatable alien intelligence. Fantastic.”
— Patton Oswalt