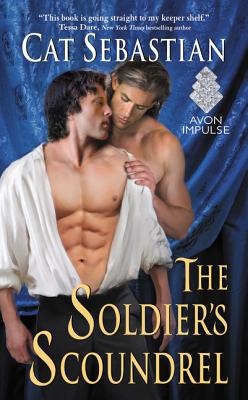 A scoundrel who lives in the shadows

Jack Turner grew up in the darkness of London’s slums, born into a life of crime and willing to do anything to keep his belly full and his siblings safe. Now he uses the tricks and schemes of the underworld to help those who need the kind of assistance only a scoundrel can provide. His distrust of the nobility runs deep and his services do not extend to the gorgeous high-born soldier who personifies everything Jack will never be.

A soldier untarnished by vice

After the chaos of war, Oliver Rivington craves the safe predictability of a gentleman’s life—one that doesn’t include sparring with a ne’er-do-well who flouts the law at every turn. But Jack tempts Oliver like no other man has before. Soon his yearning for the unapologetic criminal is only matched by Jack’s pleasure in watching his genteel polish crumble every time they’re together.

Two men meant only for each other

Cat Sebastian has written sixteen queer historical romances. Cat’s books have received starred reviews from Kirkus, Publishers Weekly, Library Journal, and Booklist. Before writing, Cat was a lawyer and a teacher and did a variety of other jobs she liked much less than she enjoys writing happy endings for queer people. She was born in New Jersey and lived in New York and Arizona before settling down in a swampy part of south. When she isn’t writing, she’s probably reading, having one-sided conversations with her dog, or doing the crossword puzzle.

“I loved THE SOLDIER’S SCOUNDREL from first page to last! Jack and Oliver completely won me over with their tenderness and passion. Cat Sebastian’s talent shines on every page. This book is going straight to my keeper shelf.” — Tessa Dare, New York Times bestselling author

Cat Sebastian sets a beautiful romance against a compelling story of blackmail, scandal and the impossibility of happily-ever-after... a reminder that love holds such power over us all. — Washington Post

“The deftly-woven suspense kept me turning the pages, while the sparks flying between Jack and Oliver were delightfully romantic. Cat Sebastian’s debut sparkles with wit and sensuality. Not to be missed!” — Lenora Bell, author of How the Duke Was Won

“Cat Sebastian is already on my auto-buy list!” — Summer Devon, co-author of THE GENTLEMAN AND THE ROGUE

“Sweetly prim Oliver and the roguish Jack will quickly win the hearts of readers, while the mysterious blackmail investigation keeps them invested to the end. An excellent choice not just for M/M romance fans but also for Regency fans with a penchant for vigilante justice.” — Library Journal