My Once and Future Duke: The Wagers of Sin (Mass Market) 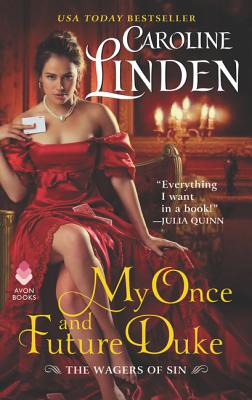 By Caroline Linden
$8.99
Backordered or Out of Print

This is book number 1 in the The Wagers of Sin series.

What happens at the infamous Vega Club . . .

Sophie Campbell is determined to be mistress of her own fate. Surviving on her skill at cards, she never risks what she can't afford to lose. Yet when the Duke of Ware proposes a scandalous wager that's too extravagant to refuse, she can't resist.

If she wins, she'll get five thousand pounds, enough to secure her independence forever.

Jack Lindeville, Duke of Ware, tells himself he's at the Vega Club merely to save his reckless brother from losing everything, but he knows it's a lie. He can't keep his eyes off Sophie, and to get her he breaks his ironclad rule against gambling. If he wins, he wants her--for a week.

A week with Jack could ruin what's left of Sophie's reputation. It might even break her heart. But when it comes to love, all bets are off . . .

Caroline Linden knew from an early age she was a reader, not a writer. She earned a math degree from Harvard University and wrote computer code before turning to fiction. Her books have won the Daphne du Maurier Award, the NJRW Golden Leaf Award, and RWA’s RITA® Award, and have been translated into seventeen languages around the world. She lives in New England with her family. Find her online at www.CarolineLinden.com.

“Romance readers will not be gambling at all in choosing RITA Award–winning Linden’s latest as she once again delivers another impeccably executed, witty, and sensual Regency historical. For fans of Eloisa James and Tessa Dare.” — Booklist (starred review)

“The beauty of the romance lies…in the telling of the story…Regency romance fans will enjoy the unmistakable air of intensity and wistfulness.” — Kirkus