Kill the Queen (A Crown of Shards Novel #1) (Paperback) 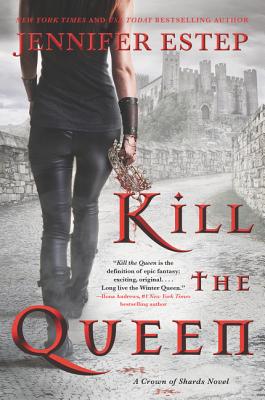 This is book number 1 in the A Crown of Shards Novel series.

Gladiator meets Game of Thrones: a royal woman becomes a skilled warrior to destroy her murderous cousin, avenge her family, and save her kingdom in this first entry in a dazzling fantasy epic from the New York Times and USA Today bestselling author of the Elemental Assassin series—an enthralling tale that combines magic, murder, intrigue, adventure, and a hint of romance.

In a realm where one’s magical power determines one’s worth, Lady Everleigh’s lack of obvious ability relegates her to the shadows of the royal court of Bellona, a kingdom steeped in gladiator tradition. Seventeenth in line for the throne, Evie is nothing more than a ceremonial fixture, overlooked and mostly forgotten.

But dark forces are at work inside the palace. When her cousin Vasilia, the crown princess, assassinates her mother the queen and takes the throne by force, Evie is also attacked, along with the rest of the royal family. Luckily for Evie, her secret immunity to magic helps her escape the massacre.

Forced into hiding to survive, she falls in with a gladiator troupe. Though they use their talents to entertain and amuse the masses, the gladiators are actually highly trained warriors skilled in the art of war, especially Lucas Sullivan, a powerful magier with secrets of his own. Uncertain of her future—or if she even has one—Evie begins training with the troupe until she can decide her next move.

But as the bloodthirsty Vasilia exerts her power, pushing Bellona to the brink of war, Evie’s fate becomes clear: she must become a fearsome gladiator herself . . . and kill the queen.

Jennifer Estep is a New York Times, USA Today, and international bestselling author who prowls the streets of her imagination in search of her next fantasy idea.

Jennifer is the author of the Crown of Shards, Elemental Assassin, and other fantasy series. She has written more than 35 books, along with numerous novellas and stories.

In her spare time, Jennifer enjoys hanging out with friends and family, doing yoga, and reading fantasy and romance books. She also watches way too much TV and loves all things related to superheroes.

“KILL THE QUEEN is the definition of epic fantasy:  exciting, original, and filled with characters who jump off the page. Jennifer Estep enters the arena and takes no prisoners. Long live the Winter Queen.” — Ilona Andrews, #1 New York Times bestselling author

“Jennifer Estep takes the world of high fantasy by storm with a book so perfectly plotted and executed that I gasped out loud at each new reveal and unexpected turn. Evie is the heroine we all want to read about: as compassionate as she is ruthless, as cunning as she is kind, and as fierce and focused as anyone must be in order to KILL THE QUEEN.” — Amanda Bouchet, USA Today bestselling author of The Kingmaker Chronicles

“Kill the Queen rocked my world! With court intrigue, a cast of fantastic characters, epic political sweep, and a slow-burn romance to die for, this book had me rapt. I only regret I devoured it so fast. And that I didn’t write it. More please!” — Jeffe Kennedy, RITA® Award winning author of The Pages of the Mind

“Jennifer Estep’s Kill the Queen is the fierce, feminist kick-off of a great new fantasy series... a sweeping, addictive adventure with a tiny hint of romance that will leave readers clamoring for more of this universe as soon as they reach the last page.” — Culturess.com