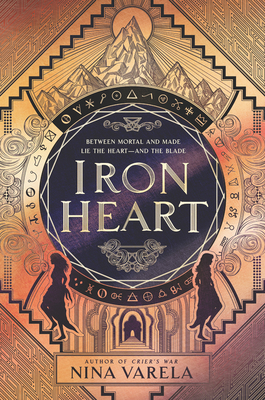 For too long, Automae have lorded over the kingdom of Rabu, oppressing its human citizens. But the human revolution has risen, and at its heart is Ayla. Once a handmaiden, now a fugitive, Ayla narrowly escaped the palace of Lady Crier, the girl she would’ve killed if she hadn’t fallen in love first.

Now Ayla has pledged her allegiance to Queen Junn, who can help accomplish the human rebellion’s ultimate goal: destroy the Iron Heart. Without its power, the Automae will be weakened to the point of extinction. Ayla wants to succeed, but can’t shake the strong feelings she’s developed for Crier. And unbeknownst to her, Crier has also fled the palace, taking up among traveling rebels, determined to find and protect Ayla.

Even as their paths collide, nothing can prepare them for the dark secret underlying the Iron Heart.

Nina Varela is a nationally awarded writer of screenplays and short fiction. She was born in New Orleans and raised on a hippie commune in Durham, North Carolina, where she spent most of her childhood playing in the Eno River, building faerie houses from moss and bark, and running barefoot through the woods. These days, Nina lives in Los Angeles with her writing partner and their tiny ill-behaved dog. She tends to write stories about young people toppling the monarchy/patriarchy/whatever-archy. On a related note, she’s queer. On a less related note, she has strong feelings about hush puppies and loves a good jambalaya. Crier’s War is her first novel. You can find Nina at any given coffee shop in the greater Los Angeles area or at www.ninavarela.com.