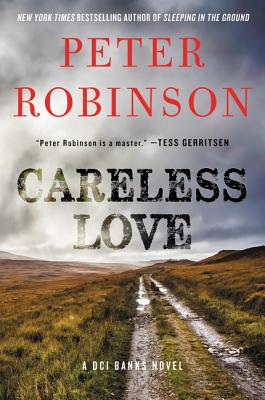 This is book number 25 in the Inspector Banks Novels series.

His fans include Stephen King, Michael Connelly, Tess Gerritsen, Ian Rankin, and Louise Penney. He has won acclaim and numerous international prizes and awards, including the Edgar. Now celebrated New York Times bestselling author Peter Robinson, one of the greatest suspense writers of our time, demonstrates his mastery once again in this powerful mystery in which legendary detective superintendent Alan Banks is confronted with a pair of perplexing crimes.

The body of an attractive young woman dressed in evening attire is found in an abandoned car on a country road. The death looks like suicide, but there are too many open questions for Banks and his team to rule out foul play. The car didn’t belong to her—it was badly damaged in an accident involving the vehicle’s owner a week earlier in the same spot. So how did the dead girl get inside the car? Did someone place her there, and if so, why? Where—and when—did she die?

While Banks attends the postmortem, DI Annie Cabot is at the scene of another death. A well-dressed man in his sixties has been found in a gully high up on the wild moorland. His injuries were fatal and consistent with those sustained in a fall. Was it an accident—did the man get too close to the edge and slip? Was he pushed? The man was wearing an expensive suit. What was he doing in a rocky spot popular with hikers? There are no signs of a vehicle near where he fell. How did he get there?

Banks’s and Cabot’s cases share a few curious similarities. Both of the dead were found in the same area of the moorlands. Both were elegantly dressed. The timing of their deaths coincided. And neither carried identification. As the police uncover who these people were and begin to look into their lives, inconsistencies multiply and the mysteries surrounding the two cases proliferate. Then a source close to Annie reveals a piece of information that rocks the Eastvale detectives working both investigations. An old enemy has returned in a new guise—a nefarious foe who will stop at nothing, not even murder, to get what he wants.

With the stakes raised, the hunt is on. But will Banks and his crack squad be able to find the evidence to stop him in time?

“As usual, Robinson provides a solid police procedural enhanced by the rugged Yorkshire setting. Banks himself—jazz and solitude-loving, difficult, somewhat melancholic, unlucky in love—is always fascinating.... For series fans, this one is a sure bet.” — Booklist

“Engrossing.... Those who enjoy methodical police procedurals that build to a logical, satisfying conclusion will be amply rewarded.” — Publishers Weekly

“Careless Love is another entertaining novel in the Inspector Banks series.” — Hamilton Spectator

“The best series now on the market. Try one and tell me I’m wrong.”
— Stephen King

“Robinson fans will enjoy the latest entry in this long-running series...Well-written and believable, with recognizable but multifaceted characters and enough twists to keep the story riveting until the mystery is solved.” — Library Journal on Careless Love

“A mighty force to be reckoned with in crime fiction.” — Publishers Weekly on Peter Robinson

“Robinson’s interrogations... have the rare quality of steadily illuminating and thickening both the speakers and their subjects. The result is a slow-burning intensity that deepens from beginning to end.” — Kirkus Reviews on Sleeping in the Ground

“...a page turner. Expect to stay up late. It’s very hard to put down.” — Wichita Falls Times Record News (TX) on Sleeping in the Ground