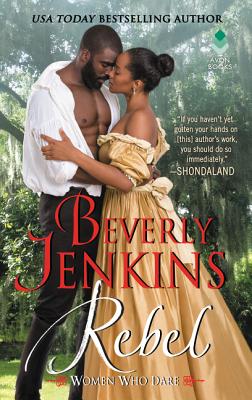 Valinda Lacy’s mission in the steamy heart of New Orleans is to help the newly emancipated community survive and flourish. But soon she discovers that here, freedom can also mean danger. When thugs destroy the school she has set up and then target her, Valinda runs for her life—and straight into the arms of Captain Drake LeVeq.

As an architect from an old New Orleans family, Drake has a deeply personal interest in rebuilding the city. Raised by strong women, he recognizes Valinda’s determination. And he can’t stop admiring—or wanting—her. But when Valinda’s father demands she return home to marry a man she doesn’t love, her daring rebellion draws Drake into an irresistible intrigue.

“Jenkins addresses sensitive, serious issues in a tactful, realistic manner, and she brilliantly balances the real sorrows of history with a shimmering romance. This is a grand tale of finding happiness in hard times.” — Publishers Weekly

“A satisfying start to a new historical series from one of romance’s finest writers.” — Kirkus Reviews (starred review)

“Both Val and Drake are fierce characters, determined to fight for the things they love and value... Jenkins knows how to craft a romantic yarn against a historical backdrop with all the attendant power and punch befitting her status as a romance icon.” — Entertainment Weekly

“Beyond the heated passion between the pair, Rebel stands out for its portrayal of the turbulent and violent atmosphere of Reconstruction-era New Orleans.” — BookPage, Starred Review

“Jenkins knows how to craft a romantic yarn against a historical backdrop with all the attendant power and punch befitting her status as a romance icon.” — Entertainment Weekly