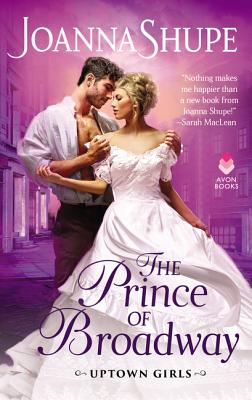 This is book number 2 in the Uptown Girls series.

In the second novel in Joanna Shupe’s the Uptown Girl series, a ruthless casino owner bent on revenge finds his plans upended by a beautiful woman who proves to be more determined than he is--and too irresistible to deny.

As the owner of the city’s most exclusive casino, Clayton Madden holds the fortunes of prominent families in the palms of his hands every night. There is one particular family he burns to ruin, however, one that has escaped his grasp . . . until now.

Florence Greene is no one’s fool. She knows Clayton Madden is using her to ruin her prestigious family . . . and she’s using him right back. She plans to learn all she can from the mysterious casino owner—then open a casino of her own just for women.

With revenge on his mind, Clay agrees to mentor Florence. However, she soon proves more adept—and more alluring—than Clay bargained for. When his plans are threatened, Clay must decide if he is willing to gamble his empire on love.

"Shupe masterfully captures the culture of New York City in the 1890s. Witty repartee, lush sensuality, and a fast-paced plot are sure to delight readers." — Publishers Weekly (starred review)

"A wild and bold uptown girl meets her match in a brooding casino owner bent on revenge against her family in this Gilded Age romance. An absolute ace, guaranteed to thrill fans of great gambling-house romances by Sarah MacLean and Lisa Kleypas." — Kirkus Reviews (starred review)

"Shupe continues her lusciously detailed Gilded Age–set series with a dynamic duo determined to get what they want at any cost. Sensual and passionate and with an unconventional, intriguing story line, this second in the series is one readers will clamor for." — Library Journal (starred review)

"With The Prince of Broadway, the second in her Gilded Age-set Uptown Girls series, Shupe continues to cut her very own swath through the historical romance subgenre by effectively using her literary moxie for mixing savvy characterization, an intriguingly different historical setting, and scorching sensuality to create the kind of captivating love stories romance readers crave." — Booklist (starred review)