Night of Demons and Saints: A Novel (The Sisters Grimm #2) (Paperback) 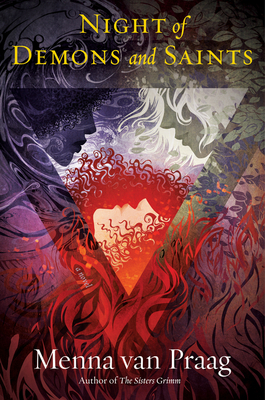 This is book number 2 in the The Sisters Grimm series.

After the battle with their demon father ends in a devastating loss, the Grimm sisters are separated. But, now three years later, as their twenty-first birthday approaches, dark fate brings them together once more.

For Goldie, this birthday is overshadowed by sorrow. She cannot forget the outcome of that battle, the devastating tragedy that has wreaked havoc on her already turbulent waking life. While her sisters have thrown themselves into their own endeavors, Goldie has grown distant and inconsolable. Driven by grief, she devises a diabolical plan using a human sacrifice to resurrect what she has lost.

When Liyana unexpectedly discovers what Goldie intends to do, she agrees to help if Goldie will try another way, without sacrificing a life. Returning to Everwhere, they combine their powerful magic to bring back what Goldie has lost. But something goes terribly wrong, and Scarlet is showing signs of being possessed by an evil spirit.

With their lives at stake, the sisters realize they must confront their personal trauma, make amends with the past, and once again prepare for a demonic fight to come.

On the night of their birthday, battle ensues . . . and tragedy strikes once more.

Menna van Praag was born in Cambridge, England and studied Modern History at Oxford University. Her first novella - an autobiographical tale about a waitress who aspires to be a writer - Men, Money & Chocolate has been translated into 26 languages. Her magical realism novels are all set among the colleges, cafes, and bookshops of Cambridge.

“Vividly drawn, evocative and complex, The Sisters Grimm is both absorbing and beautiful—a great achievement.” — Bridget Collins, author of the international bestseller The Binding

"Van Praag’s character-driven, lush novel . . .  is a story determined to exalt the powers of the feminine and of sisterhood.” — Library Journal on The Sisters Grimm

"Never less than spellbinding." — Starburst magazine on The Sisters Grimm

“For the reader who relishes fantasy-battle tales or otherworldly feminist epics, The Sisters Grimm is a dream book.”  — The Goshen News

“Enchantingly written...perfect for those who enjoyed Morgenstern’s Night Circus or the Starless Sea, but want a slightly darker twist.”  — The Nerd Daily on The Sisters Grimm