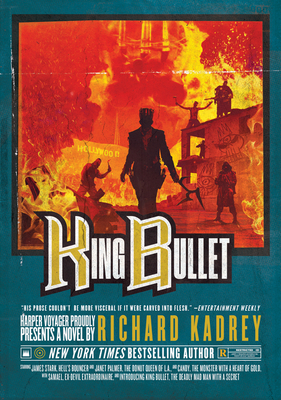 This is book number 12 in the Sandman Slim series.

It’s been three months since Stark stopped a death cult and a potential ghost apocalypse, and he’s at loose ends. His personal life is a mess. His professional life isn’t much better. And the world…well, the world is going to shit. L.A. is gripped by a viral epidemic that has everyone wearing masks and keeping their distance from each other. But what’s even more frightening is the Shoggot gang and their leader, King Bullet, who revels in the city’s collapse.

Who is King Bullet? No one knows. He seemingly came from nowhere with nothing but a taste for mayhem and an army of crazed killers who follow his every command. What king wants seems simple on it face: Chaos. Destruction. A city in flames. But there’s more to the king and his plans for L.A. and what Stark discovers will change Heaven, Earth, and Stark himself forever.

Richard Kadrey is the New York Times bestselling author of the Sandman Slim supernatural noir books. Sandman Slim was included in Amazon’s “100 Science Fiction & Fantasy Books to Read in a Lifetime,” and is in development as a feature film. Some of his other books include The Wrong Dead Guy, The Everything Box, Metrophage, and Butcher Bird. He also writes the Vertigo comic Lucifer.

“King Bullet brings in Richard Kadrey’s masterpiece for a hell of a landing…Kadrey has written a true capstone, worthy of a significant and ground-breaking contribution to the field. Endings are hard, and this is a good one. I’m going to miss Stark—but I’m so glad that he got such a worthy conclusion.” — Cory Doctorow

“This novel is like every great action movie with car chases, fight scenes, and giant explosions, all wrapped up in one fantastic book. King Bullet is by far the craziest monster that Sandman Slim has yet had to face.” — Seattle Book Review

“King Bullet is an absolutely deranged novel from start to finish (in a good way, I promise), and is probably the closest you’ll get to experiencing an acid trip while being completely sober…It really felt like Kadrey decided to leave absolutely nothing off the table when it came to the conclusion of Stark’s story, and I, for one, am glad he decided to go for it, because it gives the book an almost manic intensity that makes it hard to stop turning the pages… Read if: You like long fights against impossible odds; you know what it’s like to live on nothing but pizza; you’re wary of pigs.” — Lightspeed Magazine

"The prose simmers with Kadrey’s characteristic blend of cynicism and absurdist humor, but the nuanced character development and exciting relationship-building make this feel like a brave new direction for the series. This addictive urban fantasy works in its own right—and sets things up for what promises to be one hell of a finale." — Publishers Weekly (starred review) on Ballistic Kiss

"As always, Slim’s humor and action are right at the forefront. Perfect for readers who like their urban fantasy just a little bit over the top, and those missing Jim Butcher's Dresden Files." — Booklist on Ballistic Kiss

“In the Sandman Slim novels the reader can feel the heat of L.A., smell the smog, taste the carnitas and tamales, and know the joy of finally sliding into the AC and onto that barstool at the end of a brutal, bloody hard day of searching, fighting, killing, and just plain old surviving.”  — New York Journal of Books on Ballistic Kiss

“If this is escapism, it’s the most masochistic kind I can imagine.”  — NPR Books on Ballistic Kiss

“I hope Kadrey keeps putting out Sandman Slim books for the next twenty years. They’re that much fun to read.”  — Wired on Ballistic Kiss