Scoundrel of My Heart (Once Upon a Dukedom #1) (Mass Market) 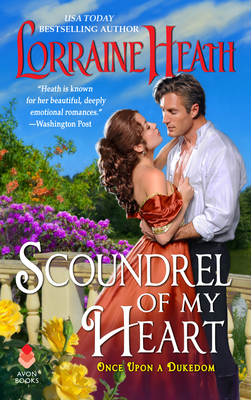 This is book number 1 in the Once Upon a Dukedom series.

She is desperate to wed a duke…

Lady Kathryn Lambert must marry a titled gentleman to claim her inheritance and has finally gained the attention of a duke. Yet she is unable to forget the scandalous second son who aided in her achievement—or his betrayal.

He wants what he can never possess…

Lord Griffith Stanwick is tormented by the bitter truth that as a “spare,” he will never be able to give Kathryn what she yearns to possess. But when his father is found guilty of treason, Griff detours into the dark and dangerous corners of London, haunted by memories of the woman lost to him forever.

Love not to be denied…

As the duke’s courtship intensifies, Kathryn discovers Griff has become a man to be reckoned with. When old passions flare and new desires ignite, she must decide if sacrificing her legacy is worth a lifetime shared with the scoundrel of her heart.

“The author’s talent for chemistry is as bold as the fireworks that explode in the first chapter.” — Kirkus Reviews

“Scoundrel of My Heart by Lorraine Heath reminds us why she's one of the legends of historical romance … this perfectly plotted historical will keep the pages turning until the happy ending.” — NPR