Sisters in Arms: A Novel of the Daring Black Women Who Served During World War II (Paperback) 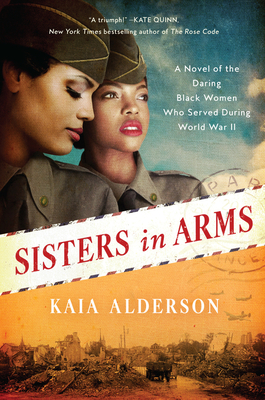 “Sisters in Arms is heartwarming but fierce, a novel brimming with camaraderie and fire, starring women you’d love to make your friends. Prickly, musical Grace and bubbly, privileged Eliza may not make the most natural allies, but it’s fight or die when they’re thrown together in the Army’s first class of female officers—and the first Black women allowed to serve their country in World War II. . . . Kaia Alderson’s debut is a triumph!”— Kate Quinn, New York Times bestselling author of The Rose Code

Kaia Alderson’s debut historical fiction novel reveals the untold, true story of the Six Triple Eight, the only all-Black battalion of the Women’s Army Corps, who made the dangerous voyage to Europe to ensure American servicemen received word from their loved ones during World War II.

Grace Steele and Eliza Jones may be from completely different backgrounds, but when it comes to the army, specifically the Women’s Army Auxiliary Corps (WAAC), they are both starting from the same level. Not only will they be among the first class of female officers the army has even seen, they are also the first Black women allowed to serve.

As these courageous women help to form the 6888th Central Postal Directory Battalion, they are dealing with more than just army bureaucracy—everyone is determined to see this experiment fail. For two northern women, learning to navigate their way through the segregated army may be tougher than boot camp. Grace and Eliza know that there is no room for error; they must be more perfect than everyone else.

Kaia Alderson is a women’s historical fiction author with a passion for discovering “hidden figures” in African American women’s history. Her specific areas of interest are women’s military history, popular music, women in sports, upper-middle-class African American society, and women’s international travel. She holds a sociology degree from Spelman College and a master’s degree in education from the University of West Georgia. She honed her writing chops at the Hurston/Wright Foundation’s and VONA’s writing workshops.

“Based on the true story of the 6888th Postal Battalion, Sisters in Arms gives readers an inside look at the racial injustices and rigors of wartime that the women battled. Alderson sweeps readers in with Grace and Eliza’s personal journeys through a little-known portion of our army’s history. Themes of female friendship, bravery, and resilience radiate from the pages of this magnificent novel.” — Booklist, starred review

"This is not just another WWII story: this is a stirring and timely novel about the only all-Black battalion of the Women’s Army Auxiliary Corps, a group of women who had to fight resolutely against countless obstacles in order to be permitted to serve their country. Grace and Eliza stole my heart with their spirit and their resilience, and the ups and downs of their tumultuous friendship made me laugh and cry. Poignant and powerful; an untold story that you simply must read.”  — Natasha Lester, New York Times bestselling author of The Paris Secret

"A thrilling anthem to the courageous sisterhood of the Six Triple Eight as they faced down racism at home and war abroad. SISTERS IN ARMS is a fresh look at the bold women who served America during World War II. A powerful debut!"  — Stephanie Marie Thornton, USA Today bestselling author of A Most Clever Girl

“Sisters in Arms by Kaia Alderson is a poignant story about perseverance in the face of difficulties set against the uncertainty and danger of World War II . . . . From the start, they are set up to fail by their families, the Army and society but they meet every challenge with grit, grace and wit, overcoming personal and professional challenges to prove their mettle. Readers will cheer and cry with these trailblazing women as they break free of their sheltered and restricted lives to overcome individual and societal prejudices and succeed in a world rocked by war.” — Georgie Blalock, author of The Last Debutantes

“Sisters in Arms is heartwarming but fierce, a novel brimming with camaraderie and fire, starring women you’d love to make your friends. Prickly, musical Grace and bubbly, privileged Eliza may not make the most natural allies, but it’s fight or die when they’re thrown together in the Army’s first class of female officers—and the first Black women allowed to serve their country in World War II. . . . Kaia Alderson’s debut is a triumph!” — Kate Quinn, New York Times bestselling author of The Rose Code

“Grace Steele and Eliza Jones are among the first Black women in the Women’s Army Auxiliary Corps, defying their families to enlist and facing even more racism than before when they put on their hard-earned uniforms. Unflinching, at times brutal, this novel pulls no punches while delivering a richly textured and unforgettable story of determination, courage, and friendship.” — Janie Chang, author of The Library of Legends

“What an exciting new voice in historical fiction! I couldn’t put down Alderson’s novel of two young Black women testing their mettle and finding friendship and purpose during World War II. With fascinating historical detail and complex characters, Sisters in Arms casts a brilliant light on a group of women too long kept in the shadows.” — Kerri Maher, author of The Girl in White Gloves

“Sisters in Arms is a riveting tale of ordinary Black women doing extraordinary things against all odds in a critical moment in world history. Kaia Alderson does an amazing job bringing these courageous yet unheralded women out of the shadows and into our hearts.” — Jamie Wesley, author of Slamdunked by Love

"A riveting, character-driven tale about the all-Negro Women’s Army Unit of World War II marks Kaia Alderson’s debut historical fiction, a triumph of immersive storytelling about heroic Black women who served their country despite discrimination in an untold story finally getting its due.” — Denny S. Bryce, Author of Wild Women and the Blues

"Eliza and Grace come alive on the pages of this gripping and inspiring novel of friendship, sisterhood, and the bravery of the women of the Six Triple Eight during WWII. Kaia Alderson’s poignant story about the all-Black female battalion who faced discrimination head on in order to serve their country is an incredible debut not to be missed!" — Eliza Knight, USA Today bestselling author

“Historical fiction novels featuring female friendships are all too rare. That's why Sisters in Arms by Kaia Alderson is such a necessary addition to the genre. Alderson beautifully describes the lead protagonists of Grace and Eliza with care and complexity to showcase the rich diversity that exists in Black womanhood . . . .  Grace and Eliza, as well as the life choices they make in the story, lingered with me for a long time once I finished their engrossing story.” — Piper Huguley, author of By Design: The Story of Ann Lowe Society’s Secret Fashion Designer

“Kaia Alderson worked her research magic into a wonderful tale of the unsung heroes of the Six Triple Eight. She brought these characters to life . . . . I was amazed by pops of true events entwined within the pages, and degrees of racism these brave women faced journeying through every step of the war. When I finished, I found my heart overfilled with joy by their amazing lives. Sisters in Arms is the perfect gift to celebrate your friendship with your besties. I have a new appreciation for these ladies, chocolate, coffee, and the mail system.” — Carolyn Hector, author of the Once Upon a Tiara series

"Powerfully written with emotional honesty and historical accuracy, Sisters in Arms explores the obstacles and triumphs of the unsung and only all-Black female battalion during World War II." — Sharina Harris author of Judge's Girls

“A beautifully rich story that dives deep into family expectations, sisterhood and self.”
— Carla Fredd, author of The Perfect Man

“Sisters in Arms is a much needed history lesson about the role of Black women in the US armed forces. Their battle wasn't just against the Nazis and enemies of the state. Kaia Alderson’s debut historical fiction novel is a tour-de-force of history, a unique story that has so much relevance to race relations in the 21st century. Alderson is about to be your new favorite author.” — Cheris Hodges, author of Won't Go Home Without You

“Beautifully written, Kaia Alderson has given us a historical gem that shines a spotlight on the lives of women who served in the only all-Black, female U.S. battalion to be deployed overseas during World War II. In her fictional release, Sisters in Arms, Alderson breathes life into a cast of dynamic characters and masterfully takes us on a journey of service and dedication to country, preservation of self, and strength in times of adversity. Grace and Eliza’s story is a brilliant depiction of resilience and highlights the untold history of black women whose influence has previously been undervalued and ignored.” — Deborah Fletcher Mello

“Readers will quickly be engrossed by Grace and Eliza’s courage and tenacity as they join the all-Black battalion of the Women’s Army Corps. The story of the trials and victories of the women in the 6888th is one that deserves to be told, and Alderson does a masterful job of shining a light on these amazing women.” — Synithia Williams, author of Careless Whispers

“A smart and engaging look into a long-neglected area of American history. The ferocity and determination of the 6888th are an inspiration.”  — Rebecca Roanhorse, New York Times Bestselling author of Trail of Lightning, Storm of Locusts, and Star Wars: Resistance Reborn

“Sisters in Arms: A Novel of the Daring Black Women Who Served During World War II lives up to its bold title. The story of these brave female soldiers will have you rooting for them with the turn of every page and brimming with pride. A triumph!” — Kwana Jackson, USA Today Bestselling Author

"Sisters in Arms is a page-turner that cleverly follows two engaging, multi-dimensional, fictional characters who bring to life the real story of a Black, female, U.S. Army battalion during WWII. Grace and Eliza accurately embody the pioneering spirit and sparkling humanity of all the Black women soldiers who triumphed, despite the personal and professional double-binds that came with being among the first women to serve in the military, while also being the first Black women to serve in the then-segregated Army." — Emily Yellin, author of Our Mothers’ War

"With sparkling prose and inherent empathy, Alderson paints a realistic, compelling portrait of these amazing women who bravely forged a path for those who would come after them." — Kianna Alexander