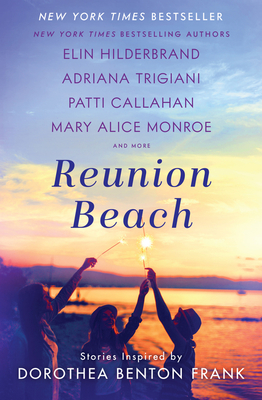 Inspired by the title Dorothea Benton Frank planned for her next book—Reunion Beach—these close friends and colleagues channeled their creativity, admiration, and grief into stories and poems that celebrate this remarkable woman and her abiding love for the Lowcountry of her native South Carolina—a land of beauty, history, charm, and Gullah magic she so brilliantly brought to life in her acclaimed novels.

From Elin Hilderbrand, #1 New York Times bestselling author, a sequel to Summer of ’69.

From Patti Callahan, bestselling author of Becoming Mrs. Lewis and Surviving Savannah, comes The Bridemaids, a story about a trip to the South Carolina beach.

Elin Hilderbrand lives on Nantucket, has three children and is the author of 27 novels, including SUMMER OF ‘69.

Elin met Dottie in the spring of 2017 at the annual Post & Courier luncheon in Charleston and Elin says, “It was love at first sight.” The two authors proceeded to meet on Nantucket every chance they got and they texted and emailed non-stop. They dreamed of doing a joint cooking show called “Cook the Books,” where they would invite a third author on to make a signature dish for each episode. They also talked about a cookbook called “The Southern Belle and the Gray Lady.” Elin’s summer of 2020 novel, 28 Summers, is dedicated to Dottie and Dottie makes a cameo appearance in Elin’s summer of 2021 novel, Golden Girl. “I will never again have a writer friend like Dottie,” Elin says. “Those of you who knew her understand what I mean, and those of you who didn’t will just have to trust me. They broke the mold.”

Beloved by millions of readers around the world for her "dazzling" novels (USA Today), Adriana Trigiani is “a master of palpable and visual detail” (Washington Post) and “a comedy writer with a heart of gold” (New York Times). She is the New York Times bestselling author of twenty books of fiction and nonfiction, including her latest, The Good Left Undone- an instant New York Times best seller, Book of the Month pick and People’s Book of the Week. Her work is published in 38 languages around the world. An award-winning playwright, television writer/producer and filmmaker, Adriana’s screen credits include writer/director of the major motion picture of her debut novel, Big Stone Gap, the adaptation of her novel Very Valentine and director of Then Came You. Adriana grew up in the Blue Ridge Mountains of Virginia where she co-founded The Origin Project, an in-school writing program serving over 1,700 students in Appalachia. She is at work on her next novel for Dutton at Penguin Random House.

Join Adriana’s Facebook LIVE show, Adriana Ink, in conversation with the world’s greatest authors- Tuesdays at 3 PM EST! For more from Adriana’s interviews, you can subscribe to her Meta “Bulletin” column, Adriana Spills the Ink: adrianatrigiani.bulletin.com/subscribe.

Patti Callahan is the New York Times and USA Today bestselling author of fifteen novels including the Historical Fiction,  Becoming Mrs. Lewis—The Improbable Love Story of Joy Davidman and C.S. Lewis and Surviving Savannah.  In addition, she is the recipient of  The Harper Lee Distinguished Writer of the Year for 2020 and the Alabama Library Association Book of the Year for 2019 and The Christy Award—A 2019 Winner "Book of the Year.” The author is also the host of the popular seven-part original "Behind the Scenes of Becoming Mrs. Lewis Podcast Series”. Patti is also the Co-creator and co-host of the weekly web show and podcast Friends & Fiction.

Patti and Dottie met when Patti’s first book was released in 2004 at a SIBA conference where the friendship was instant and long lasting.

Cassandra King is an award-winning author of five bestselling novels and two nonfiction books in addition to numerous short stories, essays, and magazine articles. Her latest book, Tell Me A Story, a memoir about life with her late husband, Pat Conroy, was named SIBA’s 2020 non-fiction Book of the Year. A native of LA (Lower Alabama), Cassandra resides in Beaufort, South Carolina, where she is honorary chair of the Pat Conroy Literary Center.

When Pat gave Dottie Frank a blurb for her first book, Sullivan’s Island, Cassandra invited Dottie for a visit to Fripp Island, and the Conroys and Franks became fast friends.

Nathalie Dupree is the author of fourteen cookbooks. She is best known for her approachability and her understanding of Southern cooking, having started the New Southern Cooking movement now found in many restaurants throughout the United States, and co-authoring Mastering the Art of Southern Cooking.

Nathalie, as she is known to her fans, has won wide recognition for her work, including four James Beard Awards and numerous others. She was also founding Chairman of the Charleston Wine and Food Festival, a founding member of many culinary organizations including the prestigious Southern Foodways and the International Association of Culinary Professionals.

She is married to author Jack Bass and lives in Charleston, SC. She travels extensively, lecturing and teaching.

Marjory Wentworth is the New York Times bestselling author of Out of Wonder, Poems Celebrating Poets (with Kwame Alexander and Chris Colderley) and many other works and poems. Her poems have been nominated for The Pushcart Prize six times. She is the current poet laureate of South Carolina. Wentworth serves on the Board of Advisors at The Global Social Justice Practice Academy, and she is a 2020 National Coalition Against Censorship Free Speech is for Me Advocate. She teaches courses in writing, social justice, and banned books at The College of Charleston.

Marjory first met Dottie in the early 2000s at a party; the next evening Dottie showed up at her door with a bottle wine and Marjory’s first book of poems and asked her if she could include one of her poems in the front of her forthcoming novel, Plantation.  Their mutual love of the South Carolina low country bonded them, and their friendship was immediate. Both women were married to men named Peter; even their children were the same ages, and they remain friends to this day. Sometimes friends become family, and it doesn’t get better than that.

Mary Alice Monroe is the New York Times bestselling author of 27 books including her newest novel The Summer of Lost and Found (May 2021, Gallery Books), and her first Middle Grade book The Islanders (June 2021, Aladdin Books).

Mary Alice Monroe is also the co-creator and co-host of the weekly webshow and podcast Friends and Fiction.

Monroe found her true calling in environmental fiction when she moved to the Isle of Palms, South Carolina. Captivated by the beauty and fragility of her new home in the lowcountry, Monroe’s experiences gave her a strong and important focus for her novels.

Monroe and Dorothea Benton Frank were lowcountry neighbors. Dottie--as she was called among friends-- lived across the inlet from Isle of Palms on the neighboring Sullivan’s Island. Together they became part of a small tribe of Lowcountry writers who gathered together over the years for meals and conversation supporting each other’s careers and personal lives. Dottie’s energy and spirit will be forever missed.

Victoria Benton Frank was born in New York City, raised in Montclair, New Jersey, but considers herself to have dual residency in the Lowcountry. She is a graduate of the College of Charleston and the French Culinary Institute. Victoria worked in restaurants in New York before returning to Charleston, South Carolina, which she considers home, with her husband, two kids, and a giant mutt. When she isn’t writing, she is reading, cooking, or chasing her children.

"This is a must-read for Frank's legion of fans, who will leave the book with a sense of the author as larger than life in her work, in her generosity, and in her personality." — Booklist (starred review)

"That’s what makes Reunion Beach the perfect tribute to Dottie Frank. It radiates with love—the love she felt for others and the love others felt for her. Thankfully her spirit lives on in her books." — Atlanta Journal-Constitution

“Reunion Beach is a poignant must-read for anyone who has spent a summer afternoon under the spell of Frank’s immersive storytelling." — Augusta Chronicle