The Return of the Duke: Once Upon a Dukedom (Mass Market) 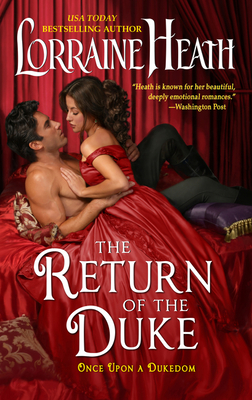 This is book number 3 in the Once Upon a Dukedom series.

In the thrilling third book in New York Times bestselling author Lorraine Heath’s Once Upon a Dukedom series, the dashing son of a disgraced duke teams up with a sultry beauty to thwart an assassination plot against Queen Victoria.

When his father, the Duke of Wolfford, is hanged for an assassination attempt on Queen Victoria, Marcus Stanwick is stripped of everything. Vowing to return honor to his family, he seeks to expose the others involved in the treasonous plot and bring them to justice. His search forces him to turn to a woman he despises for her unforgiveable betrayal—a woman known as the heartless harlot.

Harboring secrets, Esme Lancaster has her own reasons for wanting to discover who’s behind the conspiracy that’s still afoot. She doesn’t trust Marcus but can’t deny the handsome devil makes her wonder if she does indeed possess a heart, one he could very easily steal.

As their hunt for the truth leads them into danger, Marcus finds Esme isn’t cold and calculating as he’d assumed but fire and brimstone, with courage and determination to match his own. Soon, they’re unable to deny their growing desire for each other. But giving into temptation comes at a cost, and they must decide if love is worth the risk of losing their one chance for redemption.

“Brilliant…Heath slowly peels back the layers of her complex protagonists, making their forbidden attraction all the more intense and believable. With just the right blend of romance and mystery, this proves un-put-downable.” — Publishers Weekly (starred review) on The Return of the Duke

“Readers can finally enjoy Marcus’s story, and it is well worth the wait for those who love a strong heroine who breaks down all the preconceived notions that the hero has of her. Hand to readers who already love Heath, as well as fans of Stephanie Laurens and Lisa Kleypas.” — Library Journal on The Return of the Duke

“[Penelope and King’s] evolution to lovers is pleasing and satisfying, especially since they have to trust each other with truly devastating stories from their past in order to make a future together. Heath explores how society’s confining rules force people into uncomfortable and even desperate choices. The end result is a fascinating exploration of power…A complex romance [that] explores how two lovers are influenced by class, gender, and societal expectations.” — Kirkus Reviews for The Duchess Hunt

“Heath opens her Once Upon a Dukedom series with a satisfying, character-driven Victorian romance... a promising spin-off.”
— Publishers Weekly (starred review) on Scoundrel of My Heart

“Lovely prose showcase how much these characters pine for each other, physically and emotionally, and crave lives full of happiness and purpose…Sensuality shines in this tale of yearning.”  — Kirkus Reviews on Scoundrel of My Heart

“Heath has crafted a love story dedicated to the inherent romanticism of books; she understands the sensual, comforting, compassionate appeal of books, reading, and those that treasure them. The Earl Takes a Fancy possesses all her usual skill for devising romance, but more potently, it also celebrates a more deep-seated emotion and sense of connection familiar to any bookworm.”  — Entertainment Weekly

“This Sins for All Seasons series finale is full of heart.”
— Kirkus Reviews on Beauty Tempts the Beast