Heartthrobs: A History of Women and Desire (Hardcover) 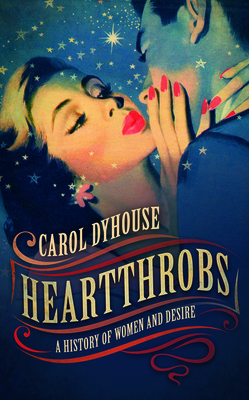 By Carol Dyhouse
$27.95
Backordered or Out of Print

What can a cultural history of the heartthrob teach us about women, desire, and social change? From dreams of Prince Charming or dashing military heroes, to the lure of dark strangers and vampire lovers; from rock stars and rebels to soulmates, dependable family types or simply good companions, female fantasies about men tell us as much about the history of women as about masculine icons. When girls were supposed to be shrinking violets, passionate females risked being seen as "unbridled," or dangerously out of control. Change came slowly, and young women remained trapped in double-binds. You may have needed a husband in order to survive, but you had to avoid looking like a gold-digger. Sexual desire could be dangerous: a rash guide to making choices. Show attraction too openly and you might be judged "fast" and undesirable. Education and wage-earning brought independence and a widening of cultural horizons. Young women in the early twentieth century showed a sustained appetite for novel-reading, cinema-going, and the dancehall. They sighed over Rudolph Valentino's screen performances, as tango-dancer, Arab tribesman, or desert lover. Contemporary critics were sniffy about "shop-girl" taste in literature and in men, but as consumers, girls had new clout. In Heartthrobs, social and cultural historian Carole Dyhouse draws upon literature, cinema, and popular romance to show how the changing position of women has shaped their dreams about men, from Lord Byron in the early nineteenth century to boy-bands in the early twenty-first. Reflecting on the history of women as consumers and on the nature of fantasy, escapism, and "fandom," she takes us deep into the world of gender and the imagination. A great deal of feminist literature has shown women as objects of the "male gaze" this book looks at men through the eyes of women.

Carol Dyhouse is Professor (Emeritus) of History at the University of Sussex. She has written extensively about the social history of women, gender, and education. Her recent publications include Glamour: Women, History, Feminism (2011) and Girl Trouble: Panic and Progress in the History of Young Women (2013). She is a Fellow of the Royal Historical Society, and in 2004 she was awarded an honorary D.Litt from the University of Winchester in recognition of her work on history and education.