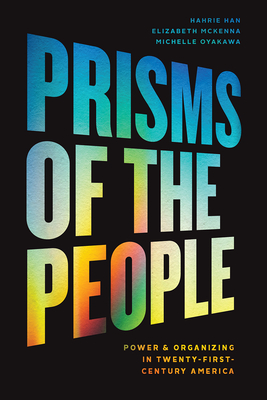 Grassroots organizing and collective action have always been fundamental to American democracy but have been burgeoning since the 2016 election, as people struggle to make their voices heard in this moment of societal upheaval. Unfortunately much of that action has not had the kind of impact participants might want, especially among movements representing the poor and marginalized who often have the most at stake when it comes to rights and equality. Yet, some instances of collective action have succeeded. What’s the difference between a movement that wins victories for its constituents, and one that fails? What are the factors that make collective action powerful?

Prisms of the People addresses those questions and more. Using data from six movement organizations—including a coalition that organized a 104-day protest in Phoenix in 2010 and another that helped restore voting rights to the formerly incarcerated in Virginia—Hahrie Han, Elizabeth McKenna, and Michelle Oyakawa show that the power of successful movements most often is rooted in their ability to act as  “prisms of the people,” turning participation into political power just as prisms transform white light into rainbows. Understanding the organizational design choices that shape the people, their leaders, and their strategies can help us understand how grassroots groups achieve their goals.

Linking strong scholarship to a deep understanding of the needs and outlook of activists, Prisms of the People is the perfect book for our moment—for understanding what’s happening and propelling it forward.

Hahrie Han is the inaugural director of the SNF Agora Institute and professor of political science at Johns Hopkins University.

Elizabeth McKenna is a postdoctoral scholar at the SNF Agora Institute at Johns Hopkins University.

“Whither US democracy? In this compelling and deeply informed book, Han, McKenna, and Oyakawa challenge accounts of collective action as leaderless, rudderless, and therefore bound to fail. Rather they uncover a prismatic politics that is people-powered, strategic, nimble, and full of possibility. With intellectual rigor, theoretical originality, and incisive analysis, they offer a renewed vision for democratic political participation: an inclusive, vital, and enduring process, never perfected or completed, but ever attuned to new social conditions.”
— Alondra Nelson, Social Science Research Council

“The book is filed with incredible nuance about the nature of power, interests, and strategy.”
— 3 Streams

“In this moment of racial reckoning in the US, this book brings an urgently needed examination of how movements rooted in black and brown people actually build power for change. This book should be read by anyone who wants to understand the messy but urgently needed path to people-powered political change.”
— Arisha Hatch, Color of Change

“Prisms of the People?provides answers to a fundamental question of our time: how can we rewire American democracy from the bottom up so that it includes all voices equally? Forging impulses of Tocqueville and Alinsky into a twenty-first-century recipe for participatory activism, the authors?show how disenfranchised people across America built organizations that were vital democratic spaces in which they transformed each other into more capable members and leaders.”
— Archon Fung, Harvard University

“Vivid, accessible, and keenly analytic, Prisms of the People provides an invaluable guide and inspiration for the politics of this moment.”
— Elisabeth S. Clemens, University of Chicago

"Prisms of the People provides more than a hint about how to build and sustain powerful community organizations, an approach firmly rooted in principles of inclusion and engagement rather than boilerplate routines or recipes. The difficult approach makes all kinds of sense: saving democracy takes democratic organizing."
— Social Forces