From Counterculture to Cyberculture: Stewart Brand, the Whole Earth Network, and the Rise of Digital Utopianism (Paperback) 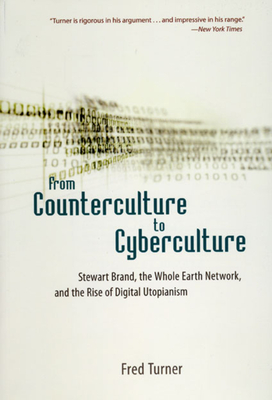 In the early 1960s, computers haunted the American popular imagination. Bleak tools of the cold war, they embodied the rigid organization and mechanical conformity that made the military-industrial complex possible. But by the 1990s—and the dawn of the Internet—computers started to represent a very different kind of world: a collaborative and digital utopia modeled on the communal ideals of the hippies who so vehemently rebelled against the cold war establishment in the first place.

From Counterculture to Cyberculture is the first book to explore this extraordinary and ironic transformation. Fred Turner here traces the previously untold story of a highly influential group of San Francisco Bay–area entrepreneurs: Stewart Brand and the Whole Earth network. Between 1968 and 1998, via such familiar venues as the National Book Award–winning Whole Earth Catalog, the computer conferencing system known as WELL, and, ultimately, the launch of the wildly successful Wired magazine, Brand and his colleagues brokered a long-running collaboration between San Francisco flower power and the emerging technological hub of Silicon Valley. Thanks to their vision, counterculturalists and technologists alike joined together to reimagine computers as tools for personal liberation, the building of virtual and decidedly alternative communities, and the exploration of bold new social frontiers.

Shedding new light on how our networked culture came to be, this fascinating book reminds us that the distance between the Grateful Dead and Google, between Ken Kesey and the computer itself, is not as great as we might think.

Fred Turner is Harry and Norman Chandler Professor of Communication at Stanford University.

“Fred Turner’s richly detailed history of how the alliance between the counterculture and digirati was formed is a fascinating story demonstrating that the computer’s metaphoric implications are never simply the result of the technology itself. Engrossing, deeply researched, and rich with implications, From Counterculture to Cyberculture is highly recommended for anyone interested in how technological objects attain meaning within social and historical contexts.”

“Chapter by chapter, Fred Turner shows inventively and with a deep knowledge of the whole scene how cold war technology met hippie communalism to produce the Whole Earth Catalog, WELL, Wired, and everything that followed. This book is a tour de force of historical digging, sociological analysis, and full understanding.”

"In Turner's meticulously detailed . . . book, he postulates that Brand was an idealistic (albeit Barnum-esque) leader of a merry band of cybernetic pranksters who framed the concept of computers and the Internet with a seemingly nonintuitive twist: These one-time engines of government and big business had transmogrified into a social force associated with egalitarianism, personal empowerment, and the nurturing cocoon of community."
— Steven Levy

"Turner's fascinating From Counterculture to Cyberculture gives us a detailed look at one slice through this marvelous story. Unlike many other histories that focus on the technical innovators . . . this account focuses on a key player whose role was making the counterculture-cyberculture connection: Stewart Brand. . . . There are a myriad of fascinating little historical details that [Turner] dug up that will surprise and enlighten even the key players in the drama."
— Henry Lieberman

“Turner convincingly portrays a cadre of journalists who strove to transform the idea of the computer from a threat during the Cold War into a means of achieving personal freedom in an emerging digital utopia.”

"Brand's trajectory from arty 60s mayhem to the halls of Congress reflects, Turner argues, a realisation that 'the natural world and the social world really were all one system of information exchange.'"
— Mike Holderness

"With its countercurrents and nuances, [the book] recalls works of the highest standard that also address technology's interactions with national culture: David E. Nye's "American Technological Sublime" (1994) comes to mind, as does Norman Mailer's 'Of a Fire on the Moon' (1971). . . . One of the many strengths . . . is that [the book] articulates the sociological forces that created this revolution in our time. Twenty-nine dollars will never buy you more book than this."
— Giles Slade

"The links this book makes between the world of the counterculture and the world of high technology make it important reading for anyone teaching or writing about the 1960s."
— Ross Knox Bassett

"[The book] fills important gaps and connections in how the Internet and computer world evolved beyond its business and military applications to include the rest of the world, and is a fascinating read."
— Midwest Book Review

"From Counterculture to Cyberculture is essential reading for anyone who wants to understand the new economy and from whence it came. This is a book that belongs in both graduate and undergraduate classrooms, not just for its scholarly message but for the deep chill it leaves behind."
— Stephen R. Barley

"A compelling history of a critical individual and his circle. . . . For professionals in the field of information dissemination and management, much can be learned by reading this fascinating and highly recommended study."
— Tom Schneiter

"This tale of cultural changes and personalities involved with the evolution of computer culture is well worth reading."
— Susan B. Barnes

"A foundational text. . . . [What] scholars will find is a thorough and thoughtful history of how the anti-establishment, communitarian dreams of a segment of the sixties counterculture were uploaded into the high-tech ethos of Silicon Valley, and from there into the world at large."
— William Bryant

"The definitive book about the Whole Earth Network as precursor of digital Utopianism and the Internet."
— Arquitectura Viva