A Life and Death Decision: A Jury Weighs the Death Penalty (Paperback) 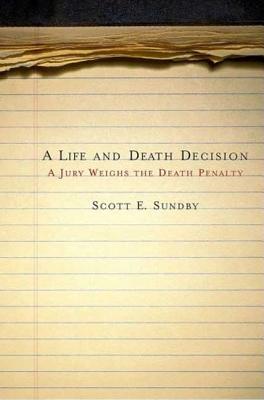 A gripping exploration of a jury's members' perspectives on the most wrenching decision: the death sentence

With a life in the balance, a jury convicts a man of murder and now has to decide whether he should be put to death. Twelve people now face a momentous choice.

Bringing drama to life, A Life and Death Decision gives unique insight into how a jury deliberates. We feel the passions, anger, and despair as the jurors grapple with legal, moral, and personal dilemmas. The jurors' voices are compelling. From the idealist to the "holdout," the individual stories—of how and why they voted for life or death—drive the narrative. The reader is right there siding with one or another juror in this riveting read.

From movies to novels to television, juries fascinate. Focusing on a single case, Sundby sheds light on broader issues, including the roles of race, class, and gender in the justice system. With death penalty cases consistently in the news, this is an important window on how real jurors deliberate about a pressing national issue.

Scott E. Sundby is the Sydney and Frances Lewis professor of law, Washington and Lee University, and has worked on both the prosecution and defense sides in a variety of criminal cases and has testified as an expert witness on the death penalty and other legal issues. He is the author of A Life and Death Decision.

“In this most recent publication from the prolific capital jury project, Sundby (law, Washington and Lee Univ.) reports the details of a single murder case as it unfolds, from the shifting perspectives of the jurors who have to decide whether to impose the death penalty. The defendant's guilt is certain; however, the narratives show that the various jurors view him through the frames of their own values and that they differ markedly from one another in the ways in which they reconstruct the crime. Confirming the findings of most other recent jury studies, Sundby finds that these conscripts approach their task conscientiously, determined to do justice. But he also finds that even when the legal requirements are clear, it proves surprisingly difficult for most jurors to actually vote to impose death on a human being. This is a model for what can be done with in-depth interviews by a scholar who is steeped in the subject and approaches it with compassion. Because of its insider perspective, thoroughness, and clarity, this book will be valuable in courses in which the death penalty is considered as a policy problem. Summing Up: Highly recommended.” —Choice

“Scott Sundby provides a remarkable new perspective on the death penalty--from the jury room. To some, it will confirm their faith in the magic of twelve citizens to find the truth. To others, it exposes the fragility of an imperfect system with which we impose the ultimate penalty.” —Bill Kurtis anchors A&E's American Justice and is the author of The Death Penalty on Trial: Crisis in American Justice

“Reading like a legal thriller, Sundby's book is a fascinating study proving the imposition of the death penalty depends more on who is on the jury than who is on trial. Like Sherlock Holmes, Sundby peers deep into the jury box and the mind of each juror to follow the Byzantine process used to send another human being to a grisly death.” —Roy Black, the famed criminal defense attorney who has handled more than 200 capital cases in the last four decades.

“This is the best account I have ever read of how a jury decides whether to impose a death sentence. We see the case from the jurors' multiple and sometimes inconsistent points of view. Deftly combining a narrative of one trial with conclusions drawn from broader research, Sundby provides unique insight into the realities behind debates about the death penalty.” —Stuart Banner, author of The Death Penalty: An American History

“While this book will resonate with criminal justice professionals and academics, it is also provides a fine introduction to thinking seriously about the death penalty from the inside out.” —Diana R. Gordon, New York Law Journal, May 2005