Principles and Agents: The British Slave Trade and Its Abolition (The David Brion Davis Series) (Hardcover) 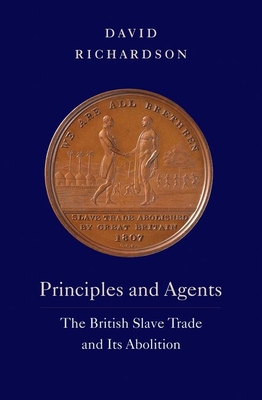 A new history of the abolition of the British slave trade

“Easily the most scholarly, clear and persuasive analysis yet published of the rise to dominance of the British in the Atlantic slave trade—as well as the implementation of abolition when that dominance was its peak.”—David Eltis, co-author of Atlas of the Transatlantic Slave Trade

Parliament’s decision in 1807 to outlaw British slaving was a key moment in modern world history. In this magisterial work, historian David Richardson challenges claims that this event was largely due to the actions of particular individuals and emphasizes instead that abolition of the British slave trade relied on the power of ordinary people to change the world. British slaving and opposition to it grew in parallel through the 1760s and then increasingly came into conflict both in the public imagination and in political discourse. Looking at the ideological tensions between Britons’ sense of themselves as free people and their willingness to enslave Africans abroad, Richardson shows that from the 1770s those simmering tensions became politicized even as British slaving activities reached unprecedented levels, mobilizing public opinion to coerce Parliament to confront and begin to resolve the issue between 1788 and 1807.

David Richardson is the former director of the Wilberforce Institute for the Study of Slavery and Emancipation, and professor of economic history, University of Hull, England. He is the author of numerous books and articles.