Not Your Ordinary Faerie Tale: A Novel of The Others (Paperback) 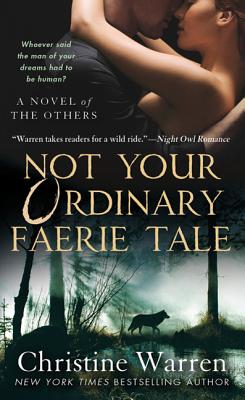 After her two best friends marry a blood-sucking vampire and furry-faced werewolf, Corinne D'Alessandro is making a vow of her own: NO interspecies dating. But when her editor asks her to investigate "leprechaun" sightings, the sassy New York reporter finds herself on the trail of the hottest story of the year—and the sexiest man alive…

His name is Luc, and he's as gorgeous as any Prince Charming in any bedtime story. There's just one problem: He's not human, he's fae. A captain of the Fae Queen's Guard, Luc is on a dangerous mission—and he could use the help of a certain leprechaun-hunting reporter. But when their two worlds collide, the sparks begin to fly. If Corinne and Luc can't control their lust—and focus on the villains in this story—their faerie-tale romance won't end happily ever after…

Christine Warren is the bestselling author of The Others series, including Wolf at the Door, Big Bad Wolf, Born to Be Wild, Prince Charming Doesn’t Live Here, and Black Magic Woman. Born and raised in coastal New England, she now lives as a transplant in the Pacific Northwest. (She completely bypassed those states in the middle due to her phobia of being landlocked). When not writing, she enjoys horseback riding, playing with her pets, identifying dogs from photos of their underbellies, and most of all reading things someone else had to agonize over.

“Warren has made a name for herself in the world of paranormal romance. she expertly mixes werewolves, vampires and faeries to create another winning novel in The Others series. Not Your Ordinary Faerie Tale showcases Warren's talents for creating consistent characters with strong voices and placing them in a fantastical world. ” —RT Book Reviews

“Warren packs in lots of action and sexy sizzle.” —Romantic Times BOOKreviews on Born to Be Wild

“Incredible.” —All About Romance on Born to Be Wild

“Warren takes readers for a wild ride.” —Night Owl Romance on Born to Be Wild

“Filled with supernatural danger, excitement, and sarcastic humor.” —Darque Reviews on You're So Vein

“Five stars. This is an exciting, sexy book.” —Affaire de Coeur on You're So Vein

“The sparks do fly!” —Romantic Times BOOKreviews on You're So Vein