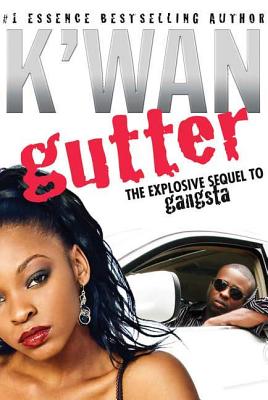 The explosive sequel to GANGSTA has finally arrived!

Blood answers for blood on the streets of Harlem. It's been months since Lou-loc was brutally murdered on his way to freedom and the pain is still fresh. Gutter, Lou-loc's best friend, finds himself on a path to self destruction, vowing to eradicate the entire Blood faction in New York City in the name of his fallen comrade. Sharell urges him to abandon the suicide mission, but his oath won't allow it. Not even for the child they are expecting. But as Gutter slips further into madness, a shocking revelation brings Satin out. In the middle of all this is a man named Major Blood. He has been flown in from Cali with two very simple instructions. Shut down Harlem Crip, and execute El Diablo's murderer. Walk back into the mouth of madness in the not-to-missed sequel to GANGSTA.

K'WAN is the #1 Essence bestselling author of Welfare Wifeys, Section 8, Gutter, Still Hood, Hood Rat, and others. He wrote his first novel, Gangsta, as a therapeutic release, and it went on to become an Essence bestseller and a part of urban-lit history. In 2008 he received the Black Author of the Year Award from Black Press Radio. He has been featured in Time, KING, The New York Press, and on MTV and BET. Besides an author, K’wan is also a motivational speaker, a mentor to at-risk children and the C.E.O of Black Dawn, Inc. He lives in New Jersey.

“The big draw draw here is the electric prose, which is imbued with profane, comic lyricism.” —Publishers Weekly on HOOD RAT

“One of hip-hop fiction's hottest authors. . .fans will appreciate many of the qualities that make K'wan a writer to check for: gritty settings, memorable dialogue and authentic action.” —KING magazine on Street Dreams

“This gangsta romp is indisputably a page-turner.” —Library Journal on Eve