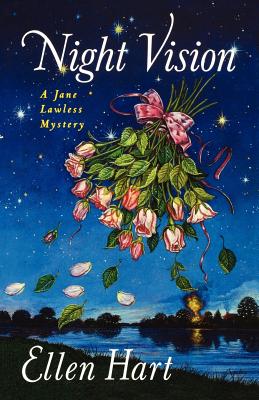 This is book number 14 in the Jane Lawless Mysteries series.

Joanna Kasimir, an old friend of Jane Lawless's, left town years ago to make it big in Hollywood. She succeeded, but stardom had a price. Early on, Joanna met a man who quickly went from being a dalliance to a stalker. A decade has passed since she sent him to prison, but just as she has returned to Minneapolis to perform at Jane's friend Cordelia Thorn's theater, Joanna receives one of his ominous calling cards.

Joanna refuses to let fear control her life---she can't. Not again. So she goes to Jane, restauranteur and amateur sleuth, for help. But can Jane protect her from a man who refuses to be anyone's one-night stand?

A deadly game of cat and mouse, Night Vision proves to be one of Ellen Hart's best mysteries yet.

“Pitting sib against sib in a deadly game, the fourteenth Lawless mystery gets highly dramatic.” —Booklist on Night Vision

“Hart masterfully whips these intrigues together with her sleuths' interesting nonmystery lives . . . to add a fine sauce to a hearty, Minneapolis-flavored mystery dish.” —Rocky Mountain News on The Iron Girl

“Incorporating societal ills torn from the headlines, Hart bares the weaknesses in her well-realized characters as well as their strengths. . . . [A] spunky page-turner.” —Publishers Weekly on An Intimate Ghost