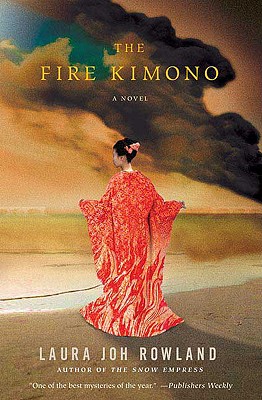 Japan, March 1700. Near a Shinto shrine in the hills, a windstorm knocks down a tree to uncover a human skeleton, long buried and forgotten. Meanwhile, in the nearby city of Edo, troops ambush and attack Lady Reiko, the wife of Sano Ichiro, the samurai detective who has risen to power and influence in the shogun's court. The troops who attacked Reiko appear to belong to Sano's fiercest enemy, Lord Matsudaira, who denies all responsibility. But if the rivals are not to blame for each other's misfortune, who is?
Just as Sano's strife with Matsudaira begins to escalate to the brink of war, the shogun orders Sano to investigate the origins of the mysterious skeleton, buried with swords that identify it as belonging to the shogun's cousin, who disappeared forty years earlier on the night that a cursed kimono touched off a fire that nearly destroyed the city.
Suddenly, Sano and Reiko are forced to confront dangerous, long-buried secrets that expose Sano's own mother as the possible culprit. The shogun gives Sano and Reiko just three days to clear her name--or risk losing not only their position at court but their families' lives.

Laura Joh Rowland, the granddaughter of Chinese and Korean immigrants, was educated at the University of Michigan and now lives in New Orleans with her husband. "The Fire Kimono" is the thirteenth novel in her acclaimed series of thrillers featuring Sano Ichiro.

“Rowland matches her talent for storytelling with her ability to render convincing historical detail in this long-running but fresh series.”  —Publishers Weekly (starred review)

“Rowland has a painter’s eye for the minutiae of court life, as well as a politician’s ear for intrigue.” —The New York Times Book Review

“Sano may carry a sword and wear a kimono, but you’ll immediately recognize him as an ancestor of Philip Marlowe or Sam Spade.” —The Denver Post

“A careful, beautiful portrayal of a dangerous time in Japanese history . . . a compelling and lively series.” —The Dallas Morning News

“One of the best mysteries of the year.” —Publishers Weekly on The Snow Empress