The Adversary: A True Story of Monstrous Deception (Paperback) 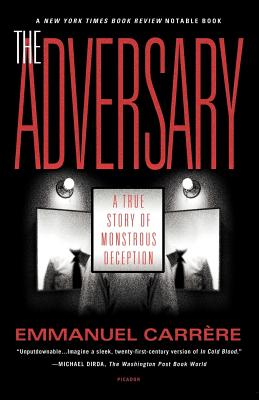 Acclaimed master of psychological suspense, Emmanuel Carrère, whose fiction John Updike described as "stunning" (The New Yorker) explores the double life of a respectable doctor, eighteen years of lies, five murders, and the extremes to which ordinary people can go.

Emmanuel Carrère, novelist, filmmaker, journalist, and biographer, is the award-winning internationally renowned author of 97,196 Words, The Adversary (a New York Times Notable Book), Lives Other Than My Own, My Life As A Russian Novel, Class Trip, and The Mustache. Carrère lives in Paris.

“The mesmerizing true crime tale of an apparently ordinary man whose life mutates in the space of a few blood-splattering hours from the realm of Renoir to that of Stephen King.” —People

“Mesmerizing...a fascinating meditation on Jean-Claude Romand and what his bizarre life might mean.” —The New York Times Book Review

“As a writer, Carrère is straight berserk; as a storyteller he is so freakishly talented, so unassuming in grace and power that you only realize the hold he's got on you when you attempt to pull away....You say: True crime and Literature? I don't believe it. I say: Believe it.” —Junot Díaz, author of Drown