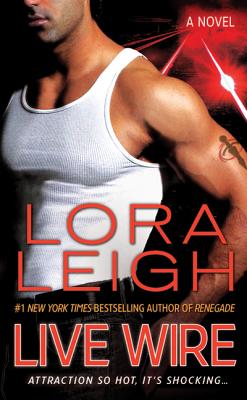 By Lora Leigh
Email or call for price.
Backordered

This is book number 6 in the Elite Ops series.

Meet Captain Jordan Malone. For years he has been a silent, sexy warrior and guardian, operating independent of government protocol or oversight, leading his loyal team of Elite Ops agents to fight terror at all costs. A legend in the field, Jordan's true identity has remained a mystery even to his own men…until now.
Tehya Talamosi, codename Enigma, is a force to be reckoned with. A woman this striking spells nothing but trouble for Jordan. Armed with killer secrets—and body to die for—she'll bring Jordan to his knees in longing as they both take on the most deadly mission they have ever faced. Because resisting desire this strong is impossible…
Live Wire is an Elite Ops novel from Lora Leigh.

#1 New York Times bestseller, LORA LEIGH is the author of the Navy SEALS, the Breeds, the Elite Ops, the Callahans, the Bound Hearts, and the Nauti series.

“Scorching-hot sex, deadly secrets and a determined assassin add up to another addicting Leigh thriller. Leigh's ability to credibly build damaged characters who are both intriguing and intense gives her stories that extra punch.” —Romantic Times BOOKreviews on Maverick

“Full of wrenching emotion and self-flagellation by the hero, the new series of Elite Ops promises to be even better than the sexy SEALs at this rate.” —Night Owl Romance on Maverick

“With her customary panache for emotionally intense, sensual characters, the author attracts readers into every world she creates. This fabulous follow-up to Wild Card is no exception to the rule.” —A Romance Review on Maverick