Walk on the Wild Side: A Novel of The Others (Mass Market) 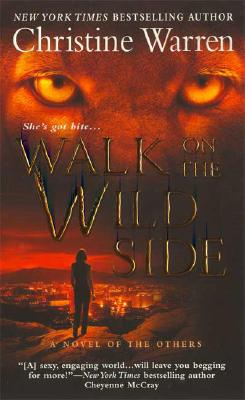 By Christine Warren
Email or call for price.
Backordered

In national bestseller Christine Warren's Others novels, vampires, witches, werewolves, and more have come out of the supernatural closet. Now, the world as we know it will never be the same...

Kitty Sugarman is a lot tougher than her name implies. Still, she's content with how her small- town life keeps her removed from all the changes happening in the world—like the Unveiling of the Others. That is, until a near-tragedy strikes and Kitty discovers she has abilities . . .thanks to a father she never knew was alive. He also happens to be a were-lion and leader of one of the most powerful Prides out West.

WALK ON THE WILD SIDE

When Kitty heads to Vegas to find out more about her father, it's his sexy, seductive second-in-command or baas of the Pride, Marcus Stewart, who commands her attention. Now that she has tempted Marcus's hunger for a mate, Kitty finds herself stuck in a vicious struggle for her father's fortune, while deadly unrest stirs within the pride. Kitty's rivals won't rest until she's gone for good, but Marcus will fight until his last breath to save her…even if it means going against the pride.

“A seductive tale with strong chemistry, roiling emotions, steamy romance and supernatural action. The fast moving plot in Walk on the Wild Side will keep the reader's attention riveted through every page, and have them eagerly watching for the next installment.” —Darque Reviews

“Christine Warren is amazingly talented and continues to show this in her latest novel Walk on The Wild Side. Walk on the Wild Side is undisputedly a masterpiece of written talent and definitely is a five hearts book!!!!” —Night Owls Romance Book Reviews